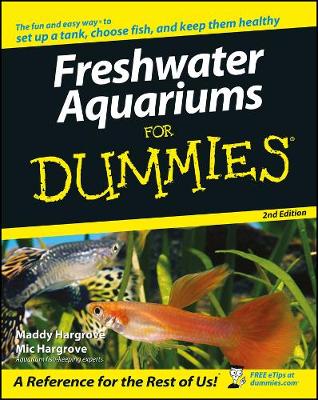 Design a dazzling underwater environment with this bestselling
guide!

Setting up your first freshwater aquarium can be a daunting task.
This friendly guide answers all your questions, from setting up
your tank and selecting fish to the water, chemicals, plants, and
much more. There's also expanded guidance on combining different
species of fish, maintaining a tank, cleaning gravel, and dealing
with common problems such as algae.

* Get good deals on equipment

» Have you read this book? We'd like to know what you think about it - write a review about Freshwater Aquariums for Dummies, 2nd Edition book by Maddy Hargrove and you'll earn 50c in Boomerang Bucks loyalty dollars (you must be a Boomerang Books Account Holder - it's free to sign up and there are great benefits!)

Maddy and Mic Hargrove are both contributing writers for many aquatic magazines, including Tropical Fish Hobbyist and Aquarium Fish magazine, and are also the authors of several aquarium books. They have both been in the writing industry for over 30 years. Maddy?s interest in fish began when she was five years old. She often dreamed of keeping fish at home as she watched the local fishermen bring in their daily catch in her hometown. She began keeping aquariums at age seven and began breeding fish at age ten. She built her aquarium collection by selling and trading her newborn fry to local aquarium stores in exchange for aquariums and equipment as she was growing up. Her passion for aquarium fish continued on after she finished her college degree in journalism and began writing aquarium-keeping articles for print and online aquatic magazines. Eventually, she wrote several aquarium columns and began writing fishkeeping books to help other hobbyists enjoy keeping aquariums at home as much as she did. Her love of fish has also appeared in her greeting cards, cartoons, and other artwork. Mic has kept aquarium fish for almost 30 years. He was one of the first sailors to develop a tank system that could keep aquarium fish alive onboard Navy vessels. His love of fish began when he saw many different species, aquatic traditions, and other hobbyists while on his worldwide military travels. Both authors enjoy breeding fish, traveling, scuba diving, cooking and creating exciting new recipes, collecting old records, and computer games.

A Preview for this title is currently not available.
More Books By Maddy Hargrove
View All