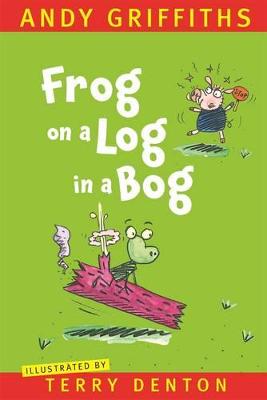 Description - Frog on a Log in a Bog by Andy Griffiths

It's the frog on a jet-rocket log versus the dog on the jet-rocket cog! Who will win the race around the bog?

This story first appeared in The Cat on the Mat is Flat, which featured a collection of short stories. The original black and white illustrations are now in colour, and the story has been redesigned in a larger format.

Buy Frog on a Log in a Bog by Andy Griffiths from Australia's Online Independent Bookstore, Boomerang Books.

» Have you read this book? We'd like to know what you think about it - write a review about Frog on a Log in a Bog book by Andy Griffiths and you'll earn 50c in Boomerang Bucks loyalty dollars (you must be a Boomerang Books Account Holder - it's free to sign up and there are great benefits!)