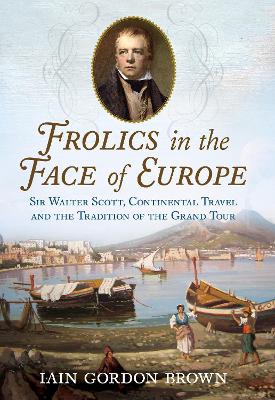 Frolics in the Face of Europe: Sir Walter Scott, Continental Travel and the Tradition of the Grand Tour

Description - Frolics in the Face of Europe: Sir Walter Scott, Continental Travel and the Tradition of the Grand Tour by Iain Gordon Brown

Sir Walter Scott (1771-1832) wrote frequently of his desire to travel widely in Europe. However, he actually made only three Continental ventures. Two were to Belgium, Northern France and Paris. Then, shortly before his death, he at last journeyed to the Mediterranean, the British Admiralty giving him free passage in a warship - a notable gesture of concern for the welfare of what today would be called a 'national treasure'. Scott visited Malta, and many cities of Italy. His months in Naples and his weeks in Rome provoked both interest and sadness: most of all they caused him to reflect from afar on Scotland, the land of his birth, his mind and his heart. He returned through the Tyrol and German lands, regions of the Continent he had long wished to see, but which he could by then barely appreciate.
All these European trips are full of interest for the modern reader. But equally, and almost more so, are the many other schemes Scott entertained for wider travelling, notably in the Iberian Peninsula and in Switzerland and Germany. In this book, all these actual and projected journeys are examined in the context of the Grand Tour tradition, and also in that of the new kind of 'romantic' travel that, after 1815, came to succeed older, prescribed forms.
Frolics in the Face of Europe (the phrase is derived from a letter of Scott's of 1824) draws on his vast correspondence and his moving journal; on his verse, and his prose fiction; and on the literature of travel which gave him such a wide knowledge of the world without even leaving his study in Edinburgh or his library at Abbotsford. A series of vignettes or pen-portraits emerges of journeys completed, and voyages merely dreamed of. Many social, literary and artistic connections are made; events, places and personalities are linked, often in surprising ways. Walter Scott emerges as a man with ambiguous ideas about travel: one who knew that he ought to travel, and to have travelled more than he did. But he was a writer of profound imaginative power, whose vicarious travelling allowed him to spend most of his time where he really wanted to be: in his native Scotland. This book offers a fresh view of Scott as the 250th anniversary of his birth approaches.

Buy Frolics in the Face of Europe: Sir Walter Scott, Continental Travel and the Tradition of the Grand Tour by Iain Gordon Brown from Australia's Online Independent Bookstore, Boomerang Books.

Book Reviews - Frolics in the Face of Europe: Sir Walter Scott, Continental Travel and the Tradition of the Grand Tour by Iain Gordon Brown

» Have you read this book? We'd like to know what you think about it - write a review about Frolics in the Face of Europe: Sir Walter Scott, Continental Travel and the Tradition of the Grand Tour book by Iain Gordon Brown and you'll earn 50c in Boomerang Bucks loyalty dollars (you must be a Boomerang Books Account Holder - it's free to sign up and there are great benefits!)


A Preview for this title is currently not available.
More Books By Iain Gordon Brown
View All