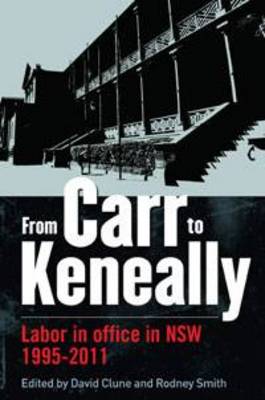 From Carr to Keneally

Description - From Carr to Keneally by David Clune

At the NSW state election in 2011, the public turned on the 16-year-old Labor administration with unprecedented fury. The Government that had won spectacular victories in 1999 and 2003 was defeated with a swing that was an Australian postwar record. How did it manage to stay in power for four terms? What were its achievements and why did things unravel so badly?

In From Carr to Keneally respected experts analyse the four terms of Labor government in NSW: the premiers and their ministers, the political parties and their electoral fortunes; the role of independents; policies in all key areas; and changes in the bureaucracy, cabinet and parliament.

The definitive account of the Labor era in NSW, From Carr to Keneally goes to the heart of issues which Labor faces around Australia at both state and federal levels.

Book Reviews - From Carr to Keneally by David Clune

» Have you read this book? We'd like to know what you think about it - write a review about From Carr to Keneally book by David Clune and you'll earn 50c in Boomerang Bucks loyalty dollars (you must be a Boomerang Books Account Holder - it's free to sign up and there are great benefits!)