From Charity to Social Justice

Description - From Charity to Social Justice by Frank M. Loewenberg

Every society has had to cope with poverty and the poor. Traditionally, most scholars have located the origins of modern philanthropies in the free-grain-distribution schemes common in ancient Greece and Rome, while most social workers see the history of philanthropic or welfare institutions as beginning with the Elizabethan Poor Laws. A few students know that the early Christian church made provisions for the poor, but few are aware of what occurred prior to the beginning of Christianity. This volume provides evidence that contemporary philanthropic and welfare institutions owe a greater debt to Judaism than to the Greco-Roman culture.By skillful use of source documents, the author explores Jewish influence on early Christian charities, seeing it as more important than previously believed. He traces the evolution of charitable institutions in ancient Judaism from the days of the monarchy until the conclusion of the Talmud, a period of about fifteen hundred years. He demonstrates how responsibility for support of the poor was initially placed on the individual, with every farmer obligated to provide for the poor from his field. Dramatic increases in the number and proportion of poor people made major structural changes imperative. A theme throughout the book is how communal institutions evolved in place of individual responsibility. The change was gradual and not without opposition. How these changes came about and in what functional areas they occurred are discussed, as well as an analysis of Jewish support for the non-Jewish poor and non-Jewish support for the Jewish poor. In an appendix, the author discusses the philanthropies of the early Christians.From Charity to Social Justice adds to current debates on the role of religious institutions in welfare programs. It will be of particular interest to those who are interested in the history of philanthropy and in the development of welfare institutions. For the first time relevant sections of the Talmud and other post-biblical Jewish writings are made available to those who cannot read these in the original.

Other Editions - From Charity to Social Justice by Frank M. Loewenberg 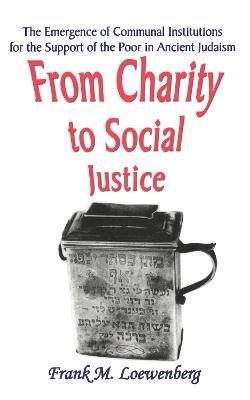 » Have you read this book? We'd like to know what you think about it - write a review about From Charity to Social Justice book by Frank M. Loewenberg and you'll earn 50c in Boomerang Bucks loyalty dollars (you must be a Boomerang Books Account Holder - it's free to sign up and there are great benefits!)


A Preview for this title is currently not available.
More Books By Frank M. Loewenberg
View All