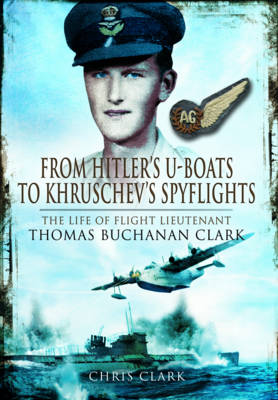 From Hitler's U-Boats to Kruschev's Spyflights

Description - From Hitler's U-Boats to Kruschev's Spyflights by Chris Clark

This book is about the Royal Air Force Career of Tom Clark, who joined the RAF as an Aircraft man just before WW2 in June 1939. After "Dunkirk" he trained as an Air Gunner and during that October Sergeant Clark joined a Flying Boat Squadron Sullom Voe, Shetland; on an Anti-Boat and Convoy Protection role. He was involved during May 1941 in the hunt for "Bismarck" and although injured was lucky to survive a fatal crash that August when five of his twelve man crew perished. Flight Sergeant Clark went on to join an Air Sea Rescue Squadron stationed in West Norfolk during 1942, and in 1943, after training as a Gunnery Leader, he became a Gunnery Instructor stationed at Gianaclis, Egypt, training Air Gunners for the Desert Air Force; during this time he was promoted to Flying Officer. Post War, Flight Lieutenant Clark trained as a Signals Leader and flew within various transport Command roles, including flying Dakota long-haul to India to collect POW's, the Berlin Airlift, two stints on "The King's Flight" and one with Far East Transport Wing VIP Flight; he also gained a Permanent Commission. He was involved during 1956 in an Intelligence role during the 1956 Soviet Leaders Bulganin and Khrushchev visit to RAF Marham, shortly after the Commander "Buster" Crabb affair, to stop Tupolev the Russian Aircraft Designer stealing technical information on Britain's "V" Bomber Squadron capabilities for cloning purposes, as at that time the Russians did not have an aircraft capable of carrying an atomic bomb. From 1958 until 1963 he was at the Central School of Electronics at RAF Watton in Norfolk and flew as a "Front End Signaller" on the Comet and Lincoln both of which were involved in a secret GCHQ ECM and RCM role, during the time of the United States CIA U-2 Spyflight programme. In short, this is a man whose illustrious and varied career deserves to be recorded, and indeed celebrated. There is perhaps no-one better placed than his son to act as custodian to his story, relayed here in engaging style, and sure to appeal to a wide cross-section of enthusiasts. ILLUSTRATIONS: 125 photographs and 88 images

» Have you read this book? We'd like to know what you think about it - write a review about From Hitler's U-Boats to Kruschev's Spyflights book by Chris Clark and you'll earn 50c in Boomerang Bucks loyalty dollars (you must be a Boomerang Books Account Holder - it's free to sign up and there are great benefits!)

Chris Clark, a war baby, was born in West Norfolk and raised at various RAF Stations, including Benson in Oxfordshire and Changi in Singapore, before his family settled in the village of Dersingham, Norfolk. He joined Norfolk Constabulary as a Police Constable in the "Heart Beat" era during March 1966 and had diverse roles within the uniform branch. He is heavily involved in family history research and is in the throes of writing a further book on the Royal Air Force and an autobiography of his experiences as a police officer, with a further book on unsolved crimes in the pipeline.

A Preview for this title is currently not available.
More Books By Chris Clark
View All