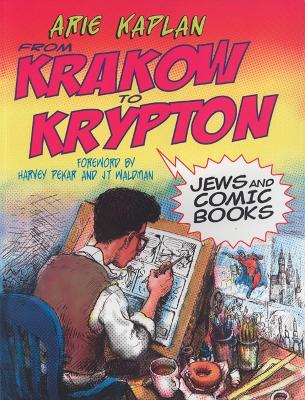 From Krakow to Krypton

Description - From Krakow to Krypton by Arie Kaplan

Jews created the first comic book, the first graphic novel, the first comic book convention, the first comic book specialty store, and they helped create the underground comics (or "Comix") movement of the late '60s and early '70s. Many of the creators of the most famous comic books, such as Superman, Spiderman, X-Men, and Batman, as well as the founders of MAD magazine, were Jewish. From Krakow to Krypton: Jews and Comic Books tells their stories and demonstrates how they brought a uniquely Jewish perspective to their work and to the comics industry as a whole. Over-sized and in full color, From Krakow to Krypton is filled with sidebars, cartoon bubbles, comic book graphics, original design sketches, and photographs. It is a visually stunning and exhilarating history.

Book Reviews - From Krakow to Krypton by Arie Kaplan

» Have you read this book? We'd like to know what you think about it - write a review about From Krakow to Krypton book by Arie Kaplan and you'll earn 50c in Boomerang Bucks loyalty dollars (you must be a Boomerang Books Account Holder - it's free to sign up and there are great benefits!)

Arie Kaplan is the author of From Krakow to Krypton: Jews and Comic Books, a 2008 National Jewish Book Award Finalist and 2009 Sophie Brody Honor Book (awarded by the American Library Association). Kaplan is a comedian, MAD magazine writer, and author of the comic book miniseries Speed Racer: Chronicles of the Racer for IDW Publishing. His other comic book credits include the DC title Cartoon Network Action Pack and the Papercutz series Tales From the Crypt. Arie lectures all over the country about comic books, comedians, and popular culture. He is the author of Masters of the Comic Book Universe Revealed! (Chicago Review Press) and he's also written for MTV, Cartoon Network, and PBS Kids. JT Waldman is a comic book illustrator and interaction designer. His first graphic novel, Megillat Esther, drew from archeological, rabbinic and pop cultural sources to create a bold retelling of the biblical story of Esther. He later went on to design a web application for JPS called the Tagged Tanakh; a site that enables people to tag and contribute remarks to any word or verse in the Bible. JT is currently working on his next graphic novel with Harvey Pekar. A graduate of the University of Michigan with a B.A. in Arts and Ideas in the Humanities, Waldman also holds a technical degree in digital design from the Vancouver Film School. He also studied at the Facultad de Bellas Artes de Sevilla in Seville, Spain, the Pennsylvania Academy of Fine Arts and the Liberal Yeshiva in Jerusalem, Israel. JT lectures and offers workshops on Jewish art, comix and midrash. He also contributed to two books, From Krakow to Krypton and The Jewish Graphic Novel, that both detail the intersection of comic books and Judaism.

A Preview for this title is currently not available.
More Books By Arie Kaplan
View All