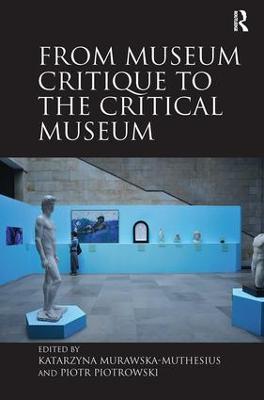 From Museum Critique to the Critical Museum

Since the late nineteenth century, museums have been cited as tools of imperialism and colonialism, as strongholds of patriarchalism, masculinism, homophobia and xenophobia, and accused both of elitism and commercialism. But, could the museum absorb and benefit from its critique, turning into a critical museum, into the site of resistance rather than ritual? This book looks at the ways in which the museum could use its collections, its cultural authority, its auratic space and resources to give voice to the underprivileged, and to take an active part in contemporary and at times controversial issues. Drawing together both major museum professionals and academics, it examines the theoretical concept of the critical museum, and uses case studies of engaged art institutions from different parts of the world. It reaches beyond the usual focus on western Europe, America, and 'the World', including voices from, as well as about, eastern European museums, which have rarely been discussed in museum studies books so far. 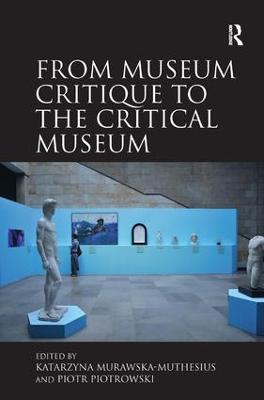 » Have you read this book? We'd like to know what you think about it - write a review about From Museum Critique to the Critical Museum book by Katarzyna Murawska-Muthesius and you'll earn 50c in Boomerang Bucks loyalty dollars (you must be a Boomerang Books Account Holder - it's free to sign up and there are great benefits!)

Katarzyna Murawska-Muthesius is a Freelance Art Historian and Associate Lecturer in History of Art in the Department of History of Art at Birkbeck College. Before her arrival in the UK in 1993, she was Curator of Italian Paintings (1981-90) and Chief Curator at The National Museum in Warsaw (1992-93). She was called back to this Museum to work as its Deputy Director (2009-11). Among her publications are National Museum in Warsaw Guide: Galleries and Study Collections (2001) and Kantor was Here: Tadeusz Kantor in Great Britain (2011). Piotr Piotrowski was Professor ordinarius in the Art History Department at Adam Mickiewicz University in PoznaA", which he chaired between 1999-2008. He was also the co-editor of the annual journal Artium Quaestiones (1994-2009), Director of the National Museum in Warsaw (2009-2010), and Senior Curator of Contemporary Art at the National Museum in PoznaA" (1992-1997). Among his publications are In the shadow of Yalta: Art and the Avant-Garde in Eastern Europe (2009) and Art and Democracy in Post-Communist Europe (2012).