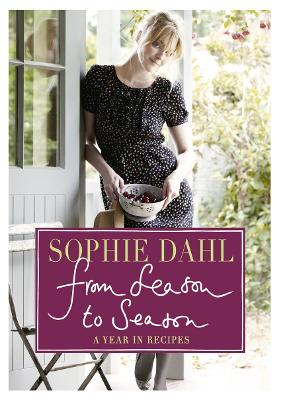 From Season to Season

A Year in Recipes

Description - From Season to Season by Sophie Dahl

Continuing where her hugely successful Voluptuous Delights left off, best selling author Sophie Dahl offers up a seasonal almanac of bountiful dishes alongside warm food-filled memories and musings.
Taking a gastronomic journey through the seasons, from the Victorian Beeton era to a recent sodden Parisian evening, Dahl captures the smoke filled days of Autumn with a nostalgic Squash and Parmesan soup, the blooming warmth of an English garden in high summer with Grilled Peaches with Pistachios and Ricotta; and the burgeoning beginnings of Spring with a Butter Lettuce, Lobster and Crayfish Salad.

Book Reviews - From Season to Season by Sophie Dahl

» Have you read this book? We'd like to know what you think about it - write a review about From Season to Season book by Sophie Dahl and you'll earn 50c in Boomerang Bucks loyalty dollars (you must be a Boomerang Books Account Holder - it's free to sign up and there are great benefits!)

Sophie Dahl was born in London in 1977 and began modelling in 1996 after being discovered by fashion maverick Isabella Blow. In 2003, her best-selling novella, The Man With the Dancing Eyes was published, followed by novel Playing With the Grown Ups in 2008, and finally her cookery book Miss Dahl's Voluptuous Delights. Dahl was the star of her own cooking series in March 2010 aired on BBC2, The Delicious Miss Dahl. Dahl has been published in American Vogue, the Guardian, the Telegraph Magazine, the Saturday Times, The Observer and The Spectator and is now a regular contributor to British Vogue. Dahl lives in England with her husband, jazz musician Jamie Cullum after an eight year sojourn in New York. They are expecting their first child.

A Preview for this title is currently not available.
More Books By Sophie Dahl
View All