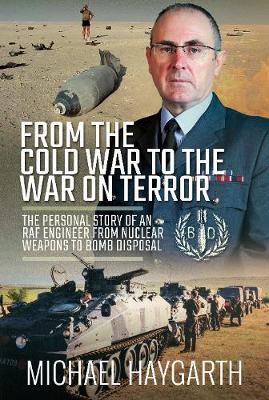 From the Cold War to the War on Terror: The Personal Story of an RAF Engineer from Nuclear Weapons to Bomb Disposal

Description - From the Cold War to the War on Terror: The Personal Story of an RAF Engineer from Nuclear Weapons to Bomb Disposal by Michael Haygarth

Michael Haygarth left home a few weeks before his seventeenth birthday to join the Royal Air Force as a Weapons Technician. At the time, everything seemed very normal and routine, but his thirty-eight-year career turned out to be anything but. From training with other nations all over the world; fast roping out of helicopters with US Army Rangers; being driven around Basra in the back of a beaten-up taxi wearing civilian clothes with a 9mm pistol stuck in his waistband; to convoying at speed around Baghdad with the United States Army looking for unexploded bombs. All of these events were extraordinary and way beyond the usual experiences of an RAF Engineer. In the early years of his career, Michael was a member of a Buccaneer Nuclear Weapon Loading Team stationed in RAF Germany at the height of the Cold War. He recalls being frequently woken by sirens in the early hours of the morning, rushing to get to work wondering if it was yet another practice or the start of the unimaginable nuclear Armageddon. After further tours in the UK, Germany and Italy, and having passed his Bomb Disposal courses and been commissioned, Michael was sent to the Falkland Islands. He also served in Kosovo as part of a huge multi-national force tasked with clearing thousands of bombs and cluster munitions, as well as working with the International Crimes Tribunal to clear numerous mass graves. He was responsible for tasking and controlling all UK Bomb Disposal operations in and around Pristina. Michael's next operational tour was to Iraq where he was responsible for the policy and plans for all Bomb Disposal operations carried out by the UK armed forces and for helping the US Army to establish a civilian contract team to carry out bulk disposal of explosives and munitions in Southern Iraq. After promotion to Squadron Leader, he worked in the MoD and then took charge of the RAF's only Bomb Disposal Squadron as it withdrew from Iraq and was instrumental in reshaping and refocusing the squadron to carry out operations in Afghanistan alongside the Army. His final role, in what was a truly exceptional career, was in charge of the RAF's only expeditionary Engineering Squadron as it worked through the busiest period in its history during the UK forces' withdrawal from Afghanistan and the escalation of events in support of operations in the Baltic states and Syria. AUTHOR: Michael Haygarth served in the RAF for thirty-eight years as an Armourer and Engineering Officer. He carried out many of the routine disciplines associated with those roles, but it was the Bomb Disposal specialisation that ultimately defined his career. Born and raised in Bishop Auckland, County Durham, he now lives in Cambridgeshire with his wife Dawn. He is a keen golfer, walker and cyclist. 20 b/w illustrations

Buy From the Cold War to the War on Terror: The Personal Story of an RAF Engineer from Nuclear Weapons to Bomb Disposal by Michael Haygarth from Australia's Online Independent Bookstore, Boomerang Books.

Book Reviews - From the Cold War to the War on Terror: The Personal Story of an RAF Engineer from Nuclear Weapons to Bomb Disposal by Michael Haygarth

» Have you read this book? We'd like to know what you think about it - write a review about From the Cold War to the War on Terror: The Personal Story of an RAF Engineer from Nuclear Weapons to Bomb Disposal book by Michael Haygarth and you'll earn 50c in Boomerang Bucks loyalty dollars (you must be a Boomerang Books Account Holder - it's free to sign up and there are great benefits!)