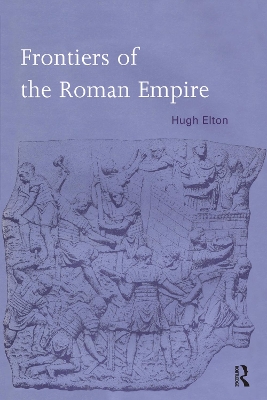 Frontiers of the Roman Empire

Description - Frontiers of the Roman Empire by Hugh Elton

With its succinct analysis of the overriding issues and detailed case-studies based on the latest archaeological research, this social and economic study of Roman Imperial frontiers is essential reading. Too often the frontier has been represented as a simple linear boundary. The reality, argues Dr Elton, was rather a fuzzy set of interlocking zones - political, military, judicial and financial. After discussion of frontier theory and types of frontier, the author analyses the acquisition of an empire and the ways in which it was ruled. He addresses the vexed question of how to define the edges of provinces, and covers the relationship with allied kingdoms. Regional variation and different rates of change are seen as significant - as is illustrated by Civilis' revolt on the Rhine in AD 69. He uses another case-study - Dura-Europos - to exemplify the role of the army on the frontier, especially its relations with the population on both sides of the border. The central importance of trade is highlighted by special consideration of Palmyra.

Other Editions - Frontiers of the Roman Empire by Hugh Elton Book Reviews - Frontiers of the Roman Empire by Hugh Elton

» Have you read this book? We'd like to know what you think about it - write a review about Frontiers of the Roman Empire book by Hugh Elton and you'll earn 50c in Boomerang Bucks loyalty dollars (you must be a Boomerang Books Account Holder - it's free to sign up and there are great benefits!)

Having taken his D. Phil at Oxford, Hugh Elton is currently at Trinity College, Hartford, Connecticut. He is co-editor of Fifth-Century Gaul: a Crisis of Identity and the author of Warfare in Roman Europe.

A Preview for this title is currently not available.
More Books By Hugh Elton
View All

Archaeology and Urban Settlement in Late Roman and Byzantine Anatolia: Euchaita-Avkat-Beyoezu and its Environment
$152.95 $169.95