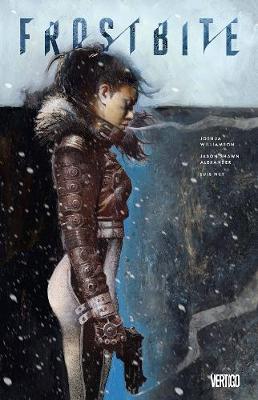 Long after Earth has entered its second ice age, humanity has learned to cope with the frozen elements. In this cold and bleak future, heat is power, and brutal gangs roam the icy wasteland looking for it. If that wasn't enough, a terrible disease nicknamed "frostbite" is literally freezing people from the inside out. Once you catch it, the effect is instantaneous. There is no immunity, there is no cure.

Until now. Doctor Henry Bonham and his daughter Victoria have found the key to ending frostbite. If they can get from Mexico City to a secret government outpost in Alcatraz, they could stabilize life across the globe. But to do that they'll need to stay alive. That's where Keaton comes in. She and her crew have faced worse journeys before, but never with the potential consequences this one poses if they fail.

» Have you read this book? We'd like to know what you think about it - write a review about Frostbite TP book by JOSHUA WILLIAMSON and you'll earn 50c in Boomerang Bucks loyalty dollars (you must be a Boomerang Books Account Holder - it's free to sign up and there are great benefits!)

Joshua Williamson lives in Portland, Oregon. His career as a comics writer kicked off the ground in 2007, and since then he has done a number of books for Shadowline, Image, Desperado Publishing, Kick Start and DC Comics. He has written the Uncharted limited series, based on the popular best-selling video game series, Voodoo, and Marvel's Illuminati and Red Skull. He is currently writing THE FLASH for DC Comics.

A Preview for this title is currently not available.
More Books By JOSHUA WILLIAMSON
View All