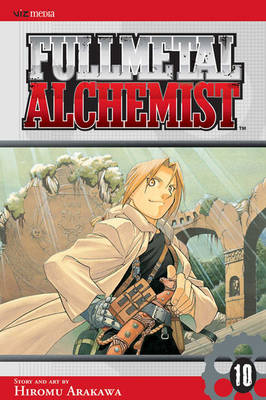 Barry the Chopper, the psychopathic killer whose soul is encased in a suit of armor, has been captured by Colonel Mustang's troops. Fearing he will reveal the Philosopher's Stone conspiracy, Gluttony and Lust decide to kill him, using Barry's own original soulless body to track him down! Though Colonel Mustang has anticipated their moves and set up an ambush, Gluttony and Lust prove too powerful and easily fight their way through to Barry, who is being protected by Al and Lieutenant Hawkeye. In a terrible battle, a badly injured Colonel Mustang sacrifices all in a last-ditch attempt to stop Lust!

» Have you read this book? We'd like to know what you think about it - write a review about Fullmetal Alchemist, Vol. 10 book by Hiromu Arakawa and you'll earn 50c in Boomerang Bucks loyalty dollars (you must be a Boomerang Books Account Holder - it's free to sign up and there are great benefits!)