Heartbreak. Vengeance. Fury. Mercy is an exiled angel cast down to earth and forced to live out thousands of different lives for her own protection. Betrayed by her eternal love, Luc, Mercy burns with fury. the time of reckoning is here and now she must wage open war with Luc and his demons. Ryan's love for Mercy is more powerful than ever, but loving an angel is mortally dangerous. As their two worlds collide, Mercy approaches her ultimate breathtaking choice. Hell hath no fury like Mercy ... 'a racy story of good and evil in a world where angels aren't all sweetness and light' - Sunday Herald Sun 'build[s] to an emotional and supernatural climax in the final book, Fury' - the Australian

Other Editions - Fury by Rebecca Lim 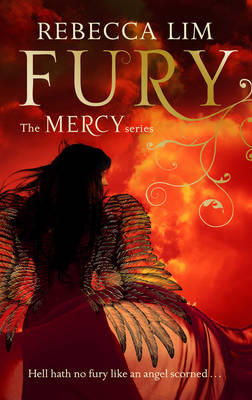 » Have you read this book? We'd like to know what you think about it - write a review about Fury book by Rebecca Lim and you'll earn 50c in Boomerang Bucks loyalty dollars (you must be a Boomerang Books Account Holder - it's free to sign up and there are great benefits!)

Mercy has finally broken free from the curse that's trapped her for thousands of years. She's grown a lot of the course of this series and it was nice to see her finally come into power, filled with the knowledge of who she is, where she's come from and how things have shifted since the day she fell from heaven. She's a girl, an angel, with a purpose; fueled by a need for vengeance, making a stand against a man she once trusted and fighting for her own right to live and love.

Although she is selfish in her want to stay on earth. Luc's reign of horror may end if she just returned to Heaven. Is her love for one human boy really worth the lives of scores of humans? I suppose it shows how... human she's become. We don't always see the bigger picture when we're consumed by what's in front of us, especially when it's love. Yes, the consequences are on a much grander scale, but she's had her life dictated to her by so many, for so long and now she's finally taken back her choice. I can grant her understanding that she wants love, wants to think of herself rather than the world. But even so, I find it hard to believe Luc would lay down and stop being an ass just because Mercy is locked away safely in Heaven. I'd bet my out-of-shape wings that he'd be hunting down Ryan and his family to use as bait. So either way, returning to Heaven or staying on earth, I felt as though both options have the potential for d-o-o-m.

Those who were swept up in Mercy and Ryan's complicated romance will be pleased to know Ryan features heavily this time around. We haven't seen him this much since the first book, only catching teasing glimmers of him in Exile and Muse. While it was nice to finally see some progression and one-on-one time between him and Mercy, even if it was marred by that potential end-of-the-world problem (as if having your girlfriend body hop wasn't enough, the devil has to add his own drama to the relationship), I do wish there was just a little less angst between them. I totally understand it, I'm just saying I got the point loud and clear with the, "You can't help me, you're just human." and "I'm just human, I'm not as awesome as you." conversations (I'm paraphrasing, can you tell?). At times I think it would have been better for him to just stay behind, because Luc is raging war on the WORLD, wiping out entire cities, Ryan doesn't really stand much of a chance going against him or his minions in his squishy mortal body. But his humanity and simple logic do prove useful among some high-and-mighty unearthly beings.

I had so much trouble writing this review, because when I set the book down, I really enjoyed the ride it took me on. Had this been just a middle book, I'd be quite happy to rate it 4 shiny golden apples, but it's the finale of a series that I've become invested in and so I expected more. There was a huge build up to the conclusion, but it didn't fulfill on it's promise. I was anticipating a climax akin to what we saw in Muse. Unfortunately, Fury went out on a much quieter note, rather than an apocalyptic-bang. Some will like it, for sure, but those who thrive on action and war will be disappointed. I did like how things ended for Mercy, though, she deserved the fate awarded to her and I like the way in which she received it. I was also hoping for some big surprise as to why Luc and Ryan look so alike. But aside from a comment Mercy makes on her own twin-like appearance to Uriel, we get nothing. I really wish I hadn't built that up to be more important than it actually was.

I do love how the series covers such a global backdrop - from California to Australia to Milan, and now in Fury, we trek across more foreign land, made easy by Mercy's wings and the awesome man-made invention of the 'plane', which spares Ryan from holy-crap-my-girlfriend-is-an-angel-and-she-is-flying-me-across-a-freaking-continent Motion Sickness. As I said above, while this wasn't my favourite installment, I still enjoyed the novel and would definitely recommend this series to others. Rebecca has beautiful writing, she's brought a really fresh edge to the angel genre in YA and I love how she's slowly unveiled the unique mythology. I look forward to seeing whatever stories she has in store for readers next, because she is definitely the kind of talent I want to add further to my shelves!

Rebecca Lim is a writer and illustrator based in Melbourne. She has written seven books for children and young adult readers, most recently the Whiffy Newton series, published in Australia and internationally. She has also won several adult writing and poetry prizes.