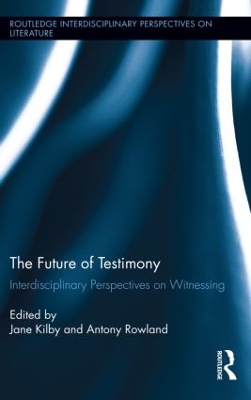 The Future of Testimony

Description - The Future of Testimony by Antony Rowland

Celebrating the twentieth anniversary of the groundbreaking Testimony, this collection brings together the leading academics from a range of scholarly fields to explore the meaning, use, and value of testimony in law and politics, its relationship to other forms of writing like literature and poetry, and its place in society. It visits testimony in relation to a range of critical developments, including the rise of Truth Commissions and the explosion and radical extension of human rights discourse; renewed cultural interest in perpetrators of violence alongside the phenomenal commercial success of victim testimony (in the form of misery memoirs); and the emergence of disciplinary interest in genocide, terror, and other violent atrocities. These issues are necessarily inflected by the question of witnessing violence, pain, and suffering at both the local and global level, across cultures, and in postcolonial contexts. At the volume's core is an interdisciplinary concern over the current and future nature of witnessing as it plays out through a 'new' Europe, post-9/11 US, war-torn Africa, and in countless refugee and detention centers, and as it is worked out by lawyers, journalists, medics, and novelists. The collection draws together an international range of case-studies, including discussion of the former Yugoslavia, Gaza, and Rwanda, and encompasses a cross-disciplinary set of texts, novels, plays, testimonial writing, and hybrid testimonies. The volume situates itself at the cutting-edge of debate and as such brings together the leading thinkers in the field, requiring that each address the future, anticipating and setting the future terms of debate on the importance of testimony.

Other Editions - The Future of Testimony by Antony Rowland Book Reviews - The Future of Testimony by Antony Rowland

» Have you read this book? We'd like to know what you think about it - write a review about Future of Testimony book by Antony Rowland and you'll earn 50c in Boomerang Bucks loyalty dollars (you must be a Boomerang Books Account Holder - it's free to sign up and there are great benefits!)

A Preview for this title is currently not available.
More Books By Antony Rowland
View All

The Future of Testimony: Interdisciplinary Perspectives on Witnessing
$85.49 $94.99