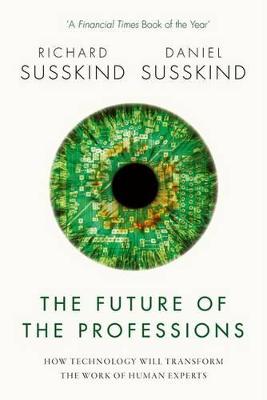 The Future of the Professions

How Technology Will Transform the Work of Human Experts

Description - The Future of the Professions by Richard Susskind

This book predicts the decline of today's professions and introduces the people and systems that will replace them. In an internet-enhanced society, according to Richard Susskind and Daniel Susskind, we will neither need nor want doctors, teachers, accountants, architects, the clergy, consultants, lawyers, and many others, to work as they did in the 20th century.The Future of the Professions explains how increasingly capable
technologies - from telepresence to artificial intelligence - will place the 'practical expertise' of the finest specialists at the fingertips of everyone, often at no or low cost and without face-to-face
interaction.The authors challenge the 'grand bargain' - the arrangement that grants various monopolies to today's professionals. They argue that our current professions are antiquated, opaque and no longer affordable, and that the expertise of their best is enjoyed only by a few. In their place, they propose five new models for producing and distributing expertise in society.The book raises profound policy issues, not least about employment (they
envisage a new generation of 'open-collared workers') and about control over online expertise (they warn of new 'gatekeepers') - in an era when machines become more capable than human beings at most
tasks.Based on the authors' in-depth research of more than a dozen professions, and illustrated by numerous examples from each, this is the first book to assess and question the future of the professions in the 21st century.

Buy The Future of the Professions by Richard Susskind from Australia's Online Independent Bookstore, Boomerang Books.

Other Editions - The Future of the Professions by Richard Susskind 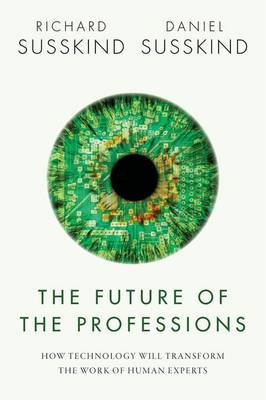 Book Reviews - The Future of the Professions by Richard Susskind

» Have you read this book? We'd like to know what you think about it - write a review about Future of the Professions book by Richard Susskind and you'll earn 50c in Boomerang Bucks loyalty dollars (you must be a Boomerang Books Account Holder - it's free to sign up and there are great benefits!)

Professor Richard Susskind OBE is an author, speaker, and independent adviser to international professional firms and national governments. He is President of the Society for Computers and Law, IT Adviser to the Lord Chief Justice of England, and Chair of the Advisory Board of the Oxford Internet Institute. His numerous books include the best-sellers, The End of Lawyers? (OUP, 2008) and Tomorrow's Lawyers (OUP, 2013), his work has been translated into more than 10 languages, and he has been invited to speak in over 40 countries. Daniel Susskind is a Fellow of Balliol College, Oxford, from where he has two degrees in economics. Previously, he worked for the British Government - in the Prime Minister's Strategy Unit, in the Policy Unit in 10 Downing Street, and as a Senior Policy Adviser at the Cabinet Office. He was a Kennedy Scholar at Harvard University.

A Preview for this title is currently not available.
More Books By Richard Susskind
View All

The Future of the Professions: How Technology Will Transform the Work of Human Experts, Updated Edition
$17.96 $19.95