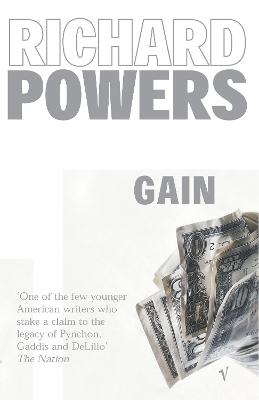 A powerful examination of the American dream and American business, reminiscent in its ambition, scope and achievement, of Don Delillo's Underworld and Graham Swift's Waterland.

FROM THE MAN BOOKER PRIZE SHORTLISTED AUTHOR OF THE OVERSTORY

Richard Powers' novel is a fascinating and profound exploration of the interaction of an individual human life and a corporate one. It tells two stories- the first that of an American company, which starts as a small family soap and candle-making firm in the early 1800s, and ends as a vast pharmaceuticals-to-pesticides combine in the 1990s. The second is that of a contemporary woman, living in the company town, who during the course of the novel is diagnosed and then finally dies of cancer, a cancer that is almost certainly caused by exposure to chemical wastes from the company's factories.

Richly intellectually stimulating, deeply moving and beautifully written, Gain is very much a 'Great American Novel', an exploration of the history, uniqueness and soul of America, in the tradition of Underworld. But it is most reminiscent of Graham Swift's Waterland, another novel that combines history, both public and private, with contemporary lives, showing how individuals are both the victims and shapers of large-scale historical and economic forces

Other Editions - Gain by Richard Powers » Have you read this book? We'd like to know what you think about it - write a review about Gain book by Richard Powers and you'll earn 50c in Boomerang Bucks loyalty dollars (you must be a Boomerang Books Account Holder - it's free to sign up and there are great benefits!)


A Preview for this title is currently not available.
More Books By Richard Powers
View All