To be successful, a modern army needs logistical support
to survive - to
arm, feed, transport, and care for its soldiers. As
history shows us the
maintenance of health in any army , is a key factor in
warfare.
In many respects the Gallipoli campaign was a doomed
undertaking. The
seeds of ultimate defeat in December 1915 were the risks
that attended
a hugely ambitious, complex, and large-scale amphibious
operation - the
landings on well-defended shores on the Gallipoli
peninsula, under cover
of darkness. Communications at the time were primitive,
while general
staff officers had little understanding of their own
army's medical assets
or the needs of a largee medical organisation. The
Australian Army Medical
Corps (AAMC) received aid from, and gave support to, all
five forces at
various times during 1915. Underlying the execution of
the Dardanelles campaign were factors
wholly outside the control of the Australian AMS.
Undoubtedly tragic,
and sometimes avoidable, errors were made at the highest
level of
command, with subsequent pressures on the AMS. An
amphibious
operation of this type and scale, however, was without
parallel in
modern military history, and mistakes were inevitable, as
they are with
any campaign of such complexity. Gallipoli An Australian
Medical Perspective explores these complexities and
mistakes through the eyes of the infant Australian Army
Medical Corps.

Other Editions - Gallipoli by Michael Tyquin 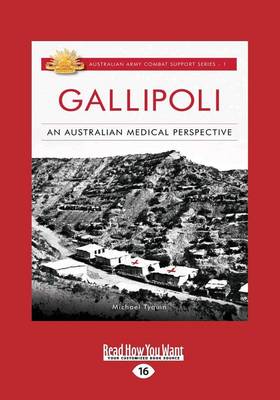 » Have you read this book? We'd like to know what you think about it - write a review about Gallipoli book by Michael Tyquin and you'll earn 50c in Boomerang Bucks loyalty dollars (you must be a Boomerang Books Account Holder - it's free to sign up and there are great benefits!)

Gallipoli: An Australian Medical Perspective
No Stock on Hand, Supplier Has No Due Date for Supply.
$41.39 $45.99