The world's most successful women, including Arianna Huffington, Gwyneth Paltrow and Elle Macpherson, tell you how to become a fearless, fabulous girl boss.

The path to success is rarely straightforward. However, with more female trailblazers out there than ever before, achieving their career goals in the worlds of business, entertainment, fashion, politics and beyond, the game is being changed forever.

Journalist Samantha Brett and editor and art director Steph Adams have spent more than two decades between them interviewing and profiling some of the most inspiring and successful women in the world. They quickly realised that these women had a few distinct qualities in common- they are fearless in their pursuits and unafraid to go after what they want, and they do not let fear of failure stop them. And they know the importance of getting back up after you've fallen down, and of trying one more time even when it seems like every avenue has been exhausted.

In The Game Changers, Samantha and Steph have handpicked the world's most inspiring women, and these women are letting you into their worlds. They are sharing their secrets to overcoming fears and challenges, and inspiring you to keep motivated, no matter how tough things become! This book features exclusive first-hand essays designed to help you to live your best life and make all your dreams come true. You'll hear success secrets and inspirational stories from the likes of Arianna Huffington, Julie Bishop, Natasha Oakley, Meghan Markle, Elle Macpherson, Rachel Zoe, Sarah Wilson, Aerin Lauder and Gwyneth Paltrow - and many, many more.

Be inspired by the women you know and love.

Other Editions - The Game Changers by Steph Adams 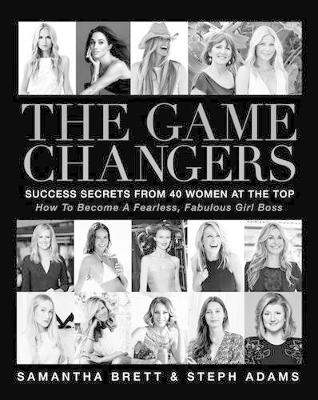 » Have you read this book? We'd like to know what you think about it - write a review about Game Changers book by Steph Adams and you'll earn 50c in Boomerang Bucks loyalty dollars (you must be a Boomerang Books Account Holder - it's free to sign up and there are great benefits!)

Samantha Brett (Author) Samantha Brett is a news reporter and bestselling author of six books. Samantha began her journalism career in New York as an intern at the Fox News Channel, before return to Sydney to write Australia's number-one lifestyle column for six years. Samantha has since gone on to file news reports for Sky News, CBS, CNN, and currently works for Australia s Seven Network. Samantha has covered a variety of international stories and breaking news including the terror attack in Jakarta and the joint world rescue of stranded researchers in Antarctica. Samantha has written more than 1000 articles for newspapers and magazines around the world on a variety of topics. She is passionate about helping other women to achieve their dreams, and is a proud supporter of the Pink Hope Foundation. Steph Adams (Author) Steph Adams is a bestselling author, art director and brand ambassador. Born in Perth, Western Australia, Steph began her career in the fashion industry as an international model before moving to Sydney in 2003. She graduated with a Bachelor of Arts Degree from Curtin University in 2004 and started working as an art director for Vogue, Vogue Living, Marie Claire, InStyle, Grazia, GQ, Belle, Gourmet Traveller, House and Garden and Delicious Magazine. Steph moved to London in 2009 and worked as an art editor for Net-a-Porter, designing their first ever magazine with Claudia Schiffer on the front. She has since worked internationally with British Vogue, Elle, Harper's Bazaar, Conde Nast Traveller and Marie Claire. As an art director, Steph has collaborated with some of the industry's most iconic image-makers, including Stephen Qu