The greatest comeback story since Jesus Christ got up on Easter Sunday and said, 'That was a weekend we won't forget in a hurry!'

I was a rugby player with a great future behind me. A 35-year-old father-of-five with an expanding waistline, who was trying to survive the bloody battlefield we call everyday life.

My son was locked in a violent turf war with a rival Love/Hate tour operator, my daughter was in love with a boy who looked like Justin Bieber and my old dear was about to walk up the aisle with a 92-year-old billionaire who thought it was still 1936.

I was, like, staring down the barrel of middle age with the contentment of knowing that I was the greatest Irish rugby player who no one in Ireland had ever actually heard of. Until a chance conversation with an old Jesuit missionary made me realize that it wasn't enough.

I was guided, as if by GPS, to a muddy field in - let's be honest - Ballybrack. And there I finally discovered my destiny - to keep a struggling Seapoint team in Division 2B of the All Ireland League.

Other Editions - Game of Throw-ins by Ross O'Carroll-Kelly 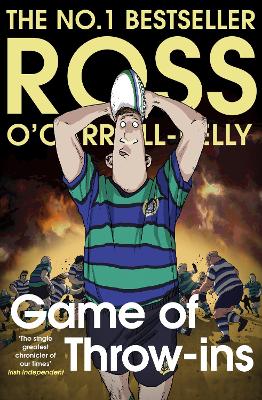 » Have you read this book? We'd like to know what you think about it - write a review about Game of Throw-ins book by Ross O'Carroll-Kelly and you'll earn 50c in Boomerang Bucks loyalty dollars (you must be a Boomerang Books Account Holder - it's free to sign up and there are great benefits!)

Game of Throw-Ins is the sixteenth novel in Paul Howard's 'Ross O'Carroll-Kelly' series. Ross books - annual No 1 bestsellers - have sold over a million copies, are annually nominated for the Popular Fiction prize at the Irish Book Awards - where they have won the prize an unprecedented three times - and are also critically acclaimed as satirical masterpieces. Paul's Ross column in the Irish Times Magazine is one of the most viewed items on its website. He also writes for the hit TV series, Irish Pictorial Weekly, and is a highly respected and liked commentator and writer.