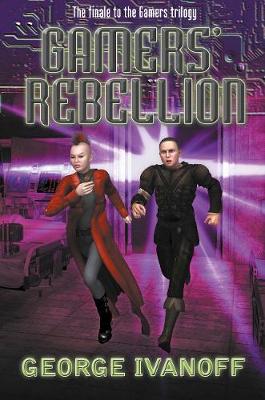 Tark and Zyra finally make it out into the real world... but things are not quite what they expected. When Zyra is captured by the Designers, Tark finds himself among a group of teenage rebels. It seems like everyone has an agenda, and Tark and Zyra are to be the pawns in other people's power games. They soon discover the sinister uses to which the game is being put and the shocking way it is all operated - with dozens of kidnapped children wired directly into the mainframe, their brains keeping the whole thing going.

Will Tark and Zyra be able to free these children? Will they be able to save the characters within the game from the people who created them? Will they even be able to remain in the real world? Or will the Designers plans for world domination win out? 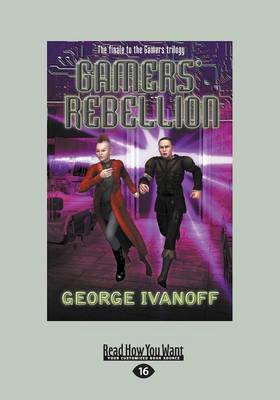 » Have you read this book? We'd like to know what you think about it - write a review about Gamers' Rebellion book by George Ivanoff and you'll earn 50c in Boomerang Bucks loyalty dollars (you must be a Boomerang Books Account Holder - it's free to sign up and there are great benefits!)

Here, at last, is the final installment in the Gamers trilogy—quite a feat considering Tark and Zyra’s tale began life as a short story in Ford Street’s first anthology, Trust Me!. In the first award-winning book, Gamers’ Quest, and then Gamers’ Challenge readers grew to love game constructs, Tark and Zyra, who over the course of these two books shrugged off their programming and became sentient beings worthy of life in the real world. And that is exactly what they’ve achieved in Gamers’ Rebellion.

“The Game was over. Or so they thought With hands tightly clasped, Tark and Zyra watched as all they had ever known melted away.”

Having successfully exited the Game, Tark and Zyra find their consciousness has been downloaded into clone bodies. At last they are in the realm of their gods, the mythical Designers. But paradise is not at all what either of them expected. Designer Prime—Robert—a broken down man who is more machine than human, has left the Game to Designers Alpha who and Beta who are kidnapping children in order to use their brainpower to keep the Game running. Having liberated Tark from the Designers, a group of rebels sends him back into the Game to find out where the enslaved children are being kept. So, too, Zyra is sent back in by Robert and the race is on to put a stop to Alpha’s dastardly deeds before more lives are lost.

The Gamers trilogy will appeal particularly to fans of, Tron, Doctor Who and Pullman’s The Golden Compass (Northern Lights). It really does have everything: mind-bendingly awesome gadgets, characters you can’t help but care about and even a side-order of romance. But more than that this story, while deceptively simple on the surface, challenges readers to consider the big questions regarding our existence. What exactly is reality? Are our gods merely game designers? Did the universe give rise to consciousness, or did consciousness create the universe? Allowed to have my way, I would put these books at the top of every school’s reading list. In a classroom environment these existential discussions could not fail to engage the most unwilling of students. Kids—and indeed adults for that matter—need stories that don’t just entertain, but encourage us to think, to enquire—to participate and not merely accept what we are able to experience through five senses. Science has already revealed sub-atomic worlds hidden from these senses. How can we possibly not want to know more?

Award-winning author, George Ivanoff has published over thirty books for young people. Find out more about George, his writing at: www.georgeivanoff.com.au

Jenny Mounfield is the author of four published titles and a number of short stories for kids and YAs. She lives in Brisbane Queensland with her husband and three grown children.

George Ivanoff is an author and stay-at-home dad residing in Melbourne. He has written over 30 books for children and teenagers, two of which are on the Victorian Premier's Reading Challenge booklist. George has also written for numerous magazines and anthologies, including Trust Me! and Doctor Who, Short Trips: Defining Patterns. Check out George's website at: http://www.georgeivanoff.com.au/