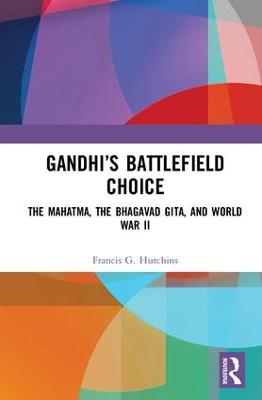 The Mahatma, The Bhagavad Gita, and World War II

This much anticipated volume compares and contrasts Gandhi's non-violent leadership during World War II to the military leadership of Arjuna in the war that prompted the Bhagavad Gita dialogue, the Sanskrit text that guided Gandhi's actions throughout his life. Early in his career as leader of India's campaign to end British rule, Gandhi resisted terrorist interpretations of the Gita and described the Gita as depicting a metaphorical battle between good and evil impulses within every human heart. Then when India was drawn into a world war not unlike that in which Arjuna reluctantly led his troops into combat, Gandhi embraced his role as battlefield commander of the millions he had trained to be non-violent warriors. Never abandoning his dedication to non-violence, Gandhi stressed to his recruits that they should act as non-violently as possible but should not passively accept injustice. Remaining true to the Bhagavad Gita while responding to urgent hazards affecting all Indians, Gandhi himself became a wartime battlefield commander leading millions in the climactic Quit India conflict that ended British rule.

The volume provides an overview of Gandhi's entire career as leader of the Indian Nationalist Movement, clarifies Gandhi's approach to acting non-violently when surrounded by violence, and affirms Gandhi's enduring importance as a source of inspiration around the world.

» Have you read this book? We'd like to know what you think about it - write a review about Gandhi's Battlefield Choice book by Francis G. Hutchins and you'll earn 50c in Boomerang Bucks loyalty dollars (you must be a Boomerang Books Account Holder - it's free to sign up and there are great benefits!)

Francis G. Hutchins is the author of books including The Illusion of Permanence: British Imperialism in India and Democratizing Monarch: A Memoir of Nepal's King Birendra. He has also translated the Sanskrit Hitopadesha, published as Animal Fables of India with drawings by A. Ramachandran, and portions of the Sanskrit Harivamsa, published as Young Krishna, illustrated by reproductions of Indian miniature paintings.

A Preview for this title is currently not available.
More Books By Francis G. Hutchins
View All