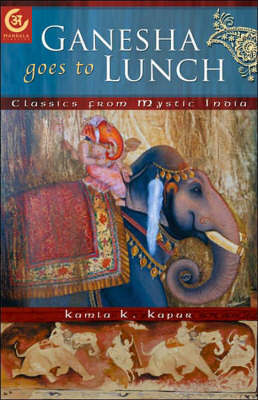 King Kubera was the greediest man in the world. Hated and feared by many, he schemed to win the love of the beautiful goddess Parvati . . . but learned an important lesson when he invited her elephant-headed son Ganesha over for lunch one day . . . So goes one of the many delightful tales in this decidedly grown-up book of traditional Indian stories, retold for the modern reader. Author Kamla Kapur is well known in her native India as a poet and playwright, and her connection to these age-old stories is the reverent yet individualistic one we might expect from someone whose introduction tells of her hometown, where naked, dreadlocked holy men speed about on motorbikes. To collect these stories, Kapur relied on ancient sacred texts, modern scholarship, and chance encounters with interesting people who just happened to know a really good one about this time that Vishnu sank into the ocean, was incarnated as a pig, and had a really wonderful time. Like myths around the world, these are teaching stories that offer both a window into a fascinating culture that has endured for thousands of years, and a code for living that can be applied to the modern world.

» Have you read this book? We'd like to know what you think about it - write a review about Ganesha Goes To Lunch book by Kamla K Kapur and you'll earn 50c in Boomerang Bucks loyalty dollars (you must be a Boomerang Books Account Holder - it's free to sign up and there are great benefits!)

Kamla K. Kapur is well known in her native India as a poet, author, and playwright. Her previous work includes Ganesha Goes to Lunch (2007) and Rumi's Tales from the Silk Road (2009). Kapur has also published two books of poetry, As a Fountain in a Garden and Radha Speaks, numerous short stories, and a series of award winning plays. Kapur was on the faculty of Grossmont College in San Diego, California, for eighteen years and taught courses in play writing, poetry, creative nonfiction, fiction, mythology, Shakespeare, and women's literature. She and her husband, Payson Stevens, divide their time living in the Kullu Valley in the Indian Himalayas and in Southern California. Nikky-Guninder Kaur Singh is Professor of Religious Studies at Colby College. She holds the Crawford Family endowed chair. She has published extensively in the field of Sikhism. Her views have also been aired on television and radio around the world. She serves as a trustee for the American Institute for Indian Studies, and is on the editorial board of the History of Religions.

A Preview for this title is currently not available.
More Books By Kamla K Kapur
View All