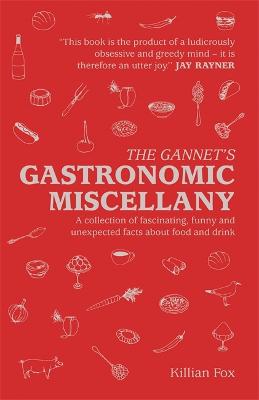 gannetnoun1. a large seabird with mainly white plumage, which catches fish by plunging into the water.2. British informal, a greedy person.THE GANNET'S GASTRONOMIC MISCELLANY goes beyond the usual food fixations. Presented in a fresh, visually inventive style, it will appeal to anyone with a passing interest in food - which, in this gastronomy-obsessed age, is pretty much all of us.In this compendious hotpot of a book you'll find a guide to creating a hit food profile on Instagram, a cross-section of a tiffin box, an explainer on craft beer, the origin story of chicken Marengo, a list of millennia-old products that are still edible today (should you be brave enough to try Irish bog butter or Ancient Egyptian honey) and many more delightful nuggets of information.Praise for The Gannet"The Gannet noses out the hidden stories about food - the unusual, the quirky, the unexpected, the personal." - Diana Henry"The Gannet is a charming observer of food being eaten, prepared and thought about. A joy." - Fergus Henderson, St John"I love The Gannet." - Sabrina Ghayour"A breath of fresh air." - El Pais

» Have you read this book? We'd like to know what you think about it - write a review about Gannet's Gastronomic Miscellany book by Killian Fox and you'll earn 50c in Boomerang Bucks loyalty dollars (you must be a Boomerang Books Account Holder - it's free to sign up and there are great benefits!)

Killian Fox (Author) Killian Fox grew up in northwest Ireland and livesin London. He is the editor and co-founder of The Gannet, which acts as a conduit for his shameless nosiness about other people's eating habits. A regular contributor to the Observer Food Monthly, he has also written for the Guardian, The Times and the New Statesman, covering music, film, literature, travel and technology as well as food. He'd call himself an omnivore were it not for a lingering fear of boiled eggs.The Gannet (Author) Founded in February 2015, The Gannet is an online magazine that explores people's lives through the food they cook and eat. It is based in London but The Gannet team travels widely, seeking out food obsessives in Paris, Sweden, New Orleans, Ireland, Mexico City and beyond. Find out more on Twitter @gannetmag, Instagram @the_gannet and at www.thegannet.com.