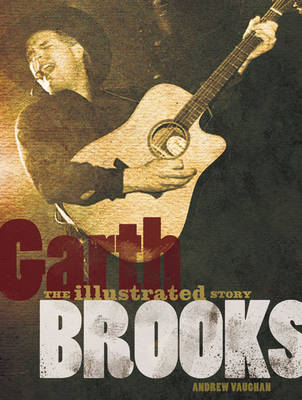 Garth Brooks is not just the most successful male country-recording artist ever; he's one of the world's bestselling artists of all time. Although he "retired" in 2001, he has since returned to the limelight, staging the biggest comeback since Sinatra. This unofficial music biography is the first fully illustrated celebration of his life and his career in all its glory, and a must-have volume for his millions of devoted fans.

» Have you read this book? We'd like to know what you think about it - write a review about Garth Brooks book by Andrew Vaughan and you'll earn 50c in Boomerang Bucks loyalty dollars (you must be a Boomerang Books Account Holder - it's free to sign up and there are great benefits!)

Andrew Vaughan is a well-known and respected musicjournalist whose work has appeared in Billboard, Music Week, Mojo, Q, the London Times, the Guardian, and many other magazines. He has been a regular guest on BBC Radio, BBC TV, and VH1. In 1998, Andrew moved from London to Nashville, where he quickly became one of the best-connected writers on the music scene. He is also the author of the UK bestselling Shania: Feel Like a Woman (Andre Deutsch) as well as The Eagles: An American Band (9781402777127) and Taylor Swift (both Sterling). He was previously editorial director for the American Music Channel and is currently an editor at Gibson.com in Nashville.

A Preview for this title is currently not available.
More Books By Andrew Vaughan
View All