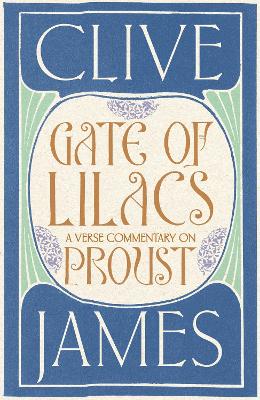 A Verse Commentary on Proust

Over a period of fifteen years Clive James learned French by almost no other method than reading A la recherche du temps perdu. Then he spent half a century trying to get up to speed with Proust's great novel in two different languages. Gate of Lilacs is the unique product of James's love and engagement with Proust's eternal masterpiece.

With A la recherche du temps perdu, Proust, in James's words, 'followed his creative instinct all the way until his breath gave out', and now James has done the same. In Gate of Lilacs, James, a brilliant critical essayist and poet, has blended the two forms into one.

I had always thought the critical essay and the poem were closely related forms . . . If I wanted to talk about Proust's poetry beyond the basic level of talking about his language - if I wanted to talk about the poetry of his thought - then the best way to do it might be to write a poem.There is nothing like a poem for transmitting a mental flavour. Instead of trying to describe it, you can evoke it.

» Have you read this book? We'd like to know what you think about it - write a review about Gate of Lilacs book by Clive James and you'll earn 50c in Boomerang Bucks loyalty dollars (you must be a Boomerang Books Account Holder - it's free to sign up and there are great benefits!)

Clive James is the multi-million-copy bestselling author of more than forty books. His poetry collection Sentenced to Life and his translation of Dante's The Divine Comedy were both Sunday Times top ten bestsellers, and his collections of verse have been shortlisted for many prizes. In 2012 he was appointed CBE and in 2013 an Officer of the Order of Australia.