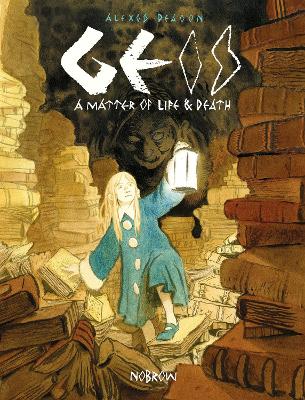 As the great chief matriarch lay dying, she gave one final decree: Upon her death there would be a contest. Having no heir of her own blood she called on the Gods. Let fate decide the one truly worthy to rule in her place. The rich, the strong, the wise, the powerful; many put forward their names in hope of being chosen. But when the night came . . . only fifty souls alone were summoned.

Book one in gripping action, supernatural, and historical fantasy graphic novel trilogy where souls battle in a contest to become the ruler of an island.

Other Editions - Geis by Alexis Deacon » Have you read this book? We'd like to know what you think about it - write a review about Geis book by Alexis Deacon and you'll earn 50c in Boomerang Bucks loyalty dollars (you must be a Boomerang Books Account Holder - it's free to sign up and there are great benefits!)

Alexis Deacon graduated in 2001 with a first class honors degree in Illustration from the University of Brighton. Before graduating he was awarded the Burt Brill and Cardens award for the second best degree show at his University. The urge to draw has been with Alexis as long as he can remember. "I've probably drawn compulsively since the age of 3 or 4." Whenever he got bored playing with a particular toy as a child, rather than put it down and pick up something else as most kids would do he'd put the toy down and pick up a sketchbook to carry the game on through pictures on paper. He is best known for his children's picture books.