Gender and the Victorian Periodical

Description - Gender and the Victorian Periodical by Hilary Fraser

Periodicals in the Victorian era portrayed and reinforced current gender notions and ideals. Indeed, the Victorian periodical press was a critical cultural site for the representation of competing gender ideologies. This is the first full-length book to examine masculinities and femininities as defined and interrogated in these periodicals. It investigates readers, editors, and journalists; and it considers the power of the press at home, in the domestic space, in metropolitan centres and at the margins of empire. The work is based on archival research into a wide range of publications from the 1830s to the fin de siecle; from enduring intellectual heavyweight quarterlies through more ephemeral women's and working men's magazines, to magazines for boys and girls. The study is informed by the theories and approaches of media and cultural studies and women's studies. A valuable appendix supplies information about the many periodicals of the period mentioned in the book.

Other Editions - Gender and the Victorian Periodical by Hilary Fraser 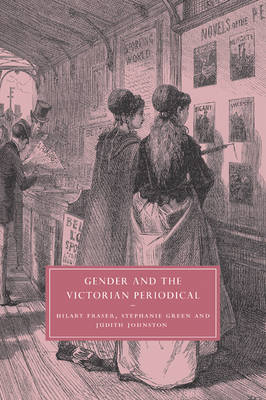 Book Reviews - Gender and the Victorian Periodical by Hilary Fraser

» Have you read this book? We'd like to know what you think about it - write a review about Gender and the Victorian Periodical book by Hilary Fraser and you'll earn 50c in Boomerang Bucks loyalty dollars (you must be a Boomerang Books Account Holder - it's free to sign up and there are great benefits!)

Hilary Fraser is Geoffrey Tillotson chair in Nineteenth-century studies in the School of English and Humanities at Birkbeck College, University of London. She is the author of Beauty and Belief: Aesthetics and Religion in Victorian Literature (Cambridge, 1986), The Victorians and Renaissance Italy (1992) and English Prose of the 19th Century (with Daniel Brown, 1997). Judith Johnston teaches in English, Communication and Cultural Studies at the University of Western Australia. She is editor with Margaret Harris of The Journals of George Eliot (1998) and author of Anna Jameson: Victorian, Feminist, Woman of Letters (1997). Stephanie Green is Lecturer for the University Extension Program at the University of Western Australia and Marketing and Promotions Manager of Fremantle Arts Centre Press. She has published widely on topics in nineteenth-century literature.

A Preview for this title is currently not available.
More Books By Hilary Fraser
View All