Gender and Violence in Historical and Contemporary Perspectives: Situating India

This book covers a range of issues and phenomena around gender-related violence in specific cultural and regional conditions. Using an interdisciplinary approach, it discusses historical and contemporary developments that trigger violence while highlighting the social conditions, practices, discourses, and cultural experiences of gender-related violence in India. Beginning with the issues of gender-based violence within the traditional context of Indian history and colonial encounters, it moves on to explore the connections between gender, minorities, marginalisation, sexuality, and violence, especially violence against Dalit women, disabled women, and transgender people. It traces and interprets similarities and differences as well as identifies social causes of potential conflicts. Further, it investigates the forms and mechanisms of political, economic, and institutional violence in the legitimation or de-legitimation of traditional gender roles. The chapters deal with sexual violence, violence within marriage and family, influence of patriarchal forces within factory-based gender violence, and global processes such as demand-driven surrogacy and the politics of literary and cinematic representations of gender-based violence. The book situates relevant debates about India and underlines the global context in the making of the gender bias that leads to violence both in the public and private domains.

An important contribution to feminist scholarship, this book will be useful to scholars and researchers of gender studies, women's studies, history, sociology, and political science.

Other Editions - Gender and Violence in Historical and Contemporary Perspectives: Situating India by Jyoti Atwal 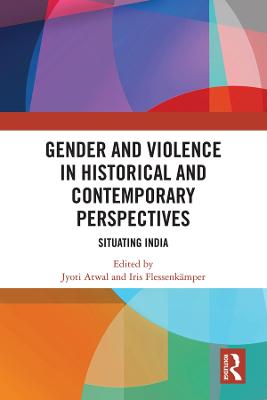 » Have you read this book? We'd like to know what you think about it - write a review about Gender and Violence in Historical and Contemporary Perspectives: Situating India book by Jyoti Atwal and you'll earn 50c in Boomerang Bucks loyalty dollars (you must be a Boomerang Books Account Holder - it's free to sign up and there are great benefits!)


A Preview for this title is currently not available.
More Books By Jyoti Atwal
View All

Gender and Violence in Historical and Contemporary Perspectives: Situating India
$249.48 $252.00