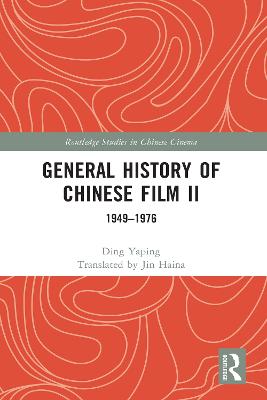 Since 1949, Chinese film has been greatly influenced by a variety of historical, cultural, and political events in the history of the People's Republic of China. This volume explores the development of Chinese film from 1949 to 1976.

This volume restores Chinese film to its original historical form and assesses its complex relationship with society, politics, culture, and art in the Maoist period. The 17-year films, Cultural Revolution-era films, the influence of model operas, and the documentary newsreels of Xinwen Jianbao are discussed. Combining a macro-perspective with a micro-perspective, the author analyzes the special characteristics of Chinese film in this period and showcases the inheritance and differences between earlier Chinese film and Chinese film in the newly founded the People's Republic of China.

The book will be essential reading for scholars and students in film studies, Chinese studies, cultural studies, and media studies, helping readers develop a comprehensive understanding of Chinese film.

» Have you read this book? We'd like to know what you think about it - write a review about General History of Chinese Film II: 1949-1976 book by Ding Yaping and you'll earn 50c in Boomerang Bucks loyalty dollars (you must be a Boomerang Books Account Holder - it's free to sign up and there are great benefits!)


A Preview for this title is currently not available.
More Books By Ding Yaping
View All