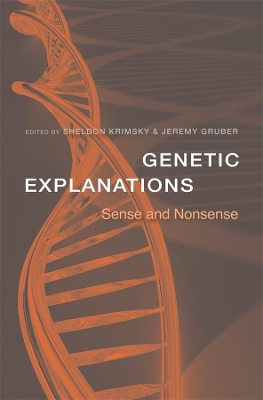 Can genes determine which fifty-year-old will succumb to Alzheimer's, which citizen will turn out on voting day, and which child will be marked for a life of crime? Yes, according to the Internet, a few scientific studies, and some in the biotechnology industry who should know better. Sheldon Krimsky and Jeremy Gruber gather a team of genetic experts to argue that treating genes as the holy grail of our physical being is a patently unscientific endeavor. Genetic Explanations urges us to replace our faith in genetic determinism with scientific knowledge about how DNA actually contributes to human development.

The concept of the gene has been steadily revised since Watson and Crick discovered the structure of the DNA molecule in 1953. No longer viewed by scientists as the cell's fixed set of master molecules, genes and DNA are seen as a dynamic script that is ad-libbed at each stage of development. Rather than an autonomous predictor of disease, the DNA we inherit interacts continuously with the environment and functions differently as we age. What our parents hand down to us is just the beginning. Emphasizing relatively new understandings of genetic plasticity and epigenetic inheritance, the authors put into a broad developmental context the role genes are known to play in disease, behavior, evolution, and cognition.

Rather than dismissing genetic reductionism out of hand, Krimsky and Gruber ask why it persists despite opposing scientific evidence, how it influences attitudes about human behavior, and how it figures in the politics of research funding.

» Have you read this book? We'd like to know what you think about it - write a review about Genetic Explanations book by Sheldon Krimsky and you'll earn 50c in Boomerang Bucks loyalty dollars (you must be a Boomerang Books Account Holder - it's free to sign up and there are great benefits!)

Sheldon Krimsky is Professor of Urban & Environmental Policy & Planning in the School of Arts and Sciences and Adjunct Professor of Public Health & Community Medicine in the School of Medicine at Tufts University. Jeremy Gruber is President and Executive Director of the Council for Responsible Genetics. Evelyn Fox Keller is Professor of History and Philosophy of Science at MIT. She is the recipient of a MacArthur Fellowship and numerous honorary degrees. Carl F. Cranor is Distinguished Professor of Philosophy and Faculty Member of the Environmental Toxicology Graduate Program at the University of California, Riverside. Jon Beckwith is American Cancer Society Research Professor of Microbiology and Molecular Genetics, Harvard Medical School.

A Preview for this title is currently not available.
More Books By Sheldon Krimsky
View All