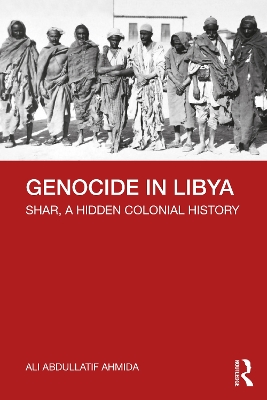 This original research on the forgotten Libyan genocide specifically recovers the hidden history of the fascist Italian concentration camps (1929-1934) through the oral testimonies of Libyan survivors. This book links the Libyan genocide through cross-cultural and comparative readings to the colonial roots of the Holocaust and genocide studies.

Between 1929 and 1934, thousands of Libyans lost their lives, directly murdered and victim to Italian deportations and internments. They were forcibly removed from their homes, marched across vast tracks of deserts and mountains, and confined behind barbed wire in 16 concentration camps. It is a story that Libyans have recorded in their Arabic oral history and narratives while remaining hidden and unexplored in a systematic fashion, and never in the manner that has allowed us to comprehend and begin to understand the extent of their existence.

Based on the survivors' testimonies, which took over ten years of fieldwork and research to document, this new and original history of the genocide is a key resource for readers interested in genocide and Holocaust studies, colonial and postcolonial studies, and African and Middle Eastern studies. » Have you read this book? We'd like to know what you think about it - write a review about Genocide in Libya: Shar, a Hidden Colonial History book by Ali Abdullatif Ahmida and you'll earn 50c in Boomerang Bucks loyalty dollars (you must be a Boomerang Books Account Holder - it's free to sign up and there are great benefits!)


A Preview for this title is currently not available.
More Books By Ali Abdullatif Ahmida
View All