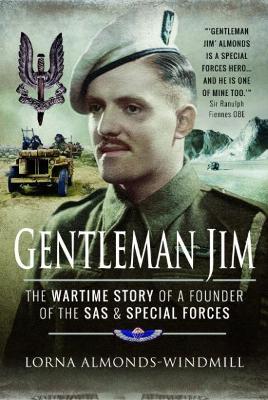 This remarkable story of Jim Almonds (Gentleman Jim) is set in wartime England, the western desert, Italy and France and recounts his formative role in the birth of the SAS. Against a dramatic background of love, courage and high-risk adventure, it captures for the first time the real spirit of the young soldiers in the newly emerging Special Air Service. Jim Almonds, a sergeant in the Guards Commandos, sailed for the Middle East as part of 'Layforce' in January 1941 with David Stirling and others destined to become SAS 'L' Detachment 'originals'. Following intensive training in the desert and action at Tobruk, Sidi Haneish, Nofelia and Benghazi, Almonds was captured and shipped to a POW camp in Italy, where he staged two escapes. After thirty-two days on the run in enemy territory, he reached US forces at the Benevento front line. Later, he parachuted into occupied France where he harried the Germans so effectively that he was awarded the Croix de Guerre. Written by Gentleman Jim's daughter and based on Almond's own diaries, various primary sources and interviews with other 'originals', the action is vivid and immediate. AUTHOR: Lorna Almonds Windmill BA served in the Army. In 1999 she won the European Union of Women/IBM Award for European Women of Achievement. She has worked in Whitehall and the voluntary sector. SELLING POINTS: . Acclaimed biography of one of the greatest 'Originals' of the SAS, Jim Almonds MM and Bar, French Croix-de-Guerre with Silver Star . Inside story of the foundation of the SAS and its leading members such as Stirling, Lewis, Mayne and Jellicoe . Tells of the dramatic successes and costly failures of Special Force operation in WW2 REVIEWS: 'An authoritative history as well as a terrific read' .Spectator 'A remarkable story told stylishly' .Soldier Magazine ILLUSTRATIONS 16 pages of b/w plates *

» Have you read this book? We'd like to know what you think about it - write a review about Gentleman Jim book by Lorna Almonds Windmill and you'll earn 50c in Boomerang Bucks loyalty dollars (you must be a Boomerang Books Account Holder - it's free to sign up and there are great benefits!)

Lorna Almonds-Windmill is an author and historian. She wrote the best-selling wartime story of her father, SAS hero and `L Detachment Original' Jim Almonds entitled `Gentleman Jim: The Wartime Story of a Founder of the SAS'. It is still the only book about one of the Founders which makes use of an Original, the only personal diary ever kept at the time of the founding of the Regiment and is fully sourced. Lorna's other book to date is `A British Achilles: The Story of George, the Second Earl Jellicoe'. This is an authorized full biography about the wartime founder of the Special Boat Service (SBS). Lorna enjoyed the full cooperation of the Earl Jellicoe, and access to his papers, and interviewed his many friends, acquaintances and contacts while writing this book. Lorna served as a Regular Army Officer and in Whitehall (DTI and HM Treasury) and in the European Commission in Brussels. She has a BA (First Class Honours) from the University of London and is a past winner of the European Union of Women/IBM Woman of Achievement Award. She is a member of the Special Forces Club.

A Preview for this title is currently not available.
More Books By Lorna Almonds Windmill
View All