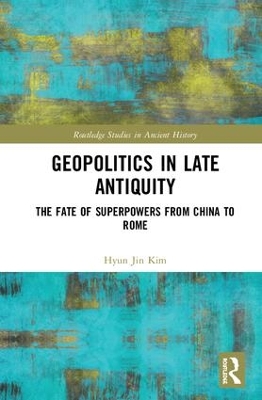 From China to Rome

Geopolitics in Late Antiquity explores the geopolitical revolution which shook the foundations of the ancient world, the dawning of the millennium of Inner Asian dominance and virtual monopoly of world power (with interludes) that began with the rise of the Huns and then continued under the hegemony of various other steppe peoples. Kim examines first the geopolitical situation created by the rise of Inner Asian powers, and then the reactions of the great empires of Eurasia to this geopolitical challenge.

A unique feature of this book is its in-depth analysis of the geostrategies (some successful, others misguided) adopted by China, Rome and Persia to cope with the growing Inner Asian threat. The conclusions and insights drawn from this analysis are then used to inform modern geopolitics, mainly the contest for hegemonic power between the United States and China.

Geopolitics in Late Antiquity is a crucial resource for both academic and learned general readership, who have an interest in the fate of antiquity's superpowers and also for those engaged in current international relations policy-making, who wish to learn from historical precedents.

» Have you read this book? We'd like to know what you think about it - write a review about Geopolitical Revolutions in Late Antiquity book by Hyun Jin Kim and you'll earn 50c in Boomerang Bucks loyalty dollars (you must be a Boomerang Books Account Holder - it's free to sign up and there are great benefits!)


A Preview for this title is currently not available.
More Books By Hyun Jin Kim
View All

Geopolitics in Late Antiquity: The Fate of Superpowers from China to Rome
$70.19 $77.99

Eurasian Empires in Antiquity and the Early Middle Ages: Contact and Exchange between the Graeco-Roman World, Inner Asia and China
$47.66 $52.95