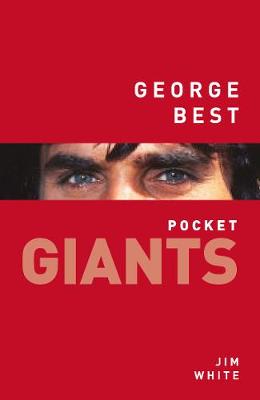 "They'll forget all the rubbish when I've gone and they'll remember the football. If only one person thinks I'm the best player in the world, that's good enough for me." On Sunday 5 October 2014, the 75,000 strong crowd at Old Trafford for Manchester United's game against Everton joined in with an extended version of a chant which echoed around the stadium. 'We all live in a Georgie Best world,' it went. Eleven years after his death, forty years after he walked out of the club for the last time as a player, Best remains an idol. Which is extraordinary given that his star shone for such a brief time. He was at the top of the game for no more than half a dozen years. What this book will attempt to do, through reminiscence and analysis, is to try to pinpoint how Best did it. How did the shy, introverted Belfast boy become the most instantly recognised man in the game? What was it about the way he played, the way he moved, the way he looked that marked him out? AUTHOR: Jim White is a journalist and broadcaster on a number of subjects, including sport. He has written for the Independent, Guardian and latterly the Telegraph. He is a regular contributor to Radio 5's Fighting Talk and Radio 4's Saturday Review and is frequently heard on TalkSport. He has written and presented a number of broadcast documentaries including an hour-long profile of Jose Mourinho for Sky. SELLING POINTS: . Arguably the best British footballer of all time. . First Rock Star of football. Brought the Swingin' '60s onto the pitch . Charismatic and enigmatic character. The old adage 'men wanted to be him and women wanted him' should have been written about Best . A tragic story of what might have been

» Have you read this book? We'd like to know what you think about it - write a review about George Best: pocket GIANTS book by Jim White and you'll earn 50c in Boomerang Bucks loyalty dollars (you must be a Boomerang Books Account Holder - it's free to sign up and there are great benefits!)

Jim White is the author of Manchester United: The Biography and You'll Win Nothing With Kids.

A Preview for this title is currently not available.
More Books By Jim White
View All

The Sharecropper Boy Goes Back Home: A Memoir of a Personal Journey Beginning With the Great Depression
$136.96 $152.18