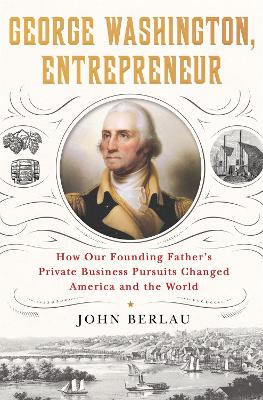 George Washington: general, statesman, businessman? Most people don't know that Washington was the country's first true entrepreneur, responsible for innovations in several industries. In George Washington, Entrepreneur, John Berlau presents this unfamiliar side of our founding father through an in-depth tour of Mount Vernon.

History has depicted Washington as a gifted general and political pragmatist, not an intellectual heavyweight. But he was a serious inventor and tinkerer, and just as intelligent as Jefferson or Franklin. His library was filled with books on agriculture, chemistry, and engineering. He was the first to breed horses with donkeys to produce the American mule. On his estate, he grew countless varieties of trees and built a greenhouse full of exotic fruits and flowers. Unlike his Virginia neighbors who remained wedded to tobacco, Washington planted seven types of wheat. His state-of-the-art mill produced flour which he exported to Europe in sacks stamped GW Flour-one of the very first branded food products. Mount Vernon was also home to a distillery and became one of the largest American whiskey distributors of the era.

Berlau's portrait of Washington, drawn in large part from his journals and extensive correspondence, presents a side of him we haven't seen before. It is sure to delight readers of presidential biography and business history.

» Have you read this book? We'd like to know what you think about it - write a review about George Washington, Entrepreneur book by John Berlau and you'll earn 50c in Boomerang Bucks loyalty dollars (you must be a Boomerang Books Account Holder - it's free to sign up and there are great benefits!)

JOHN BERLAU is an award-winning journalist, recipient of the National Press Club's Sandy Hume Memorial Award for Excellence in Political Journalism, and Senior Fellow for Finance and Access to Capital at CEI. He is a columnist for Forbes and Newsmax, and has contributed to Financial Times, Washington Post, Politico, Wall Street Journal, and Washington Times. He is a frequent guest on CNBC, CNN, Fox News, and Fox Business. He lives near Mount Vernon in Alexandria, VA.

A Preview for this title is currently not available.
More Books By John Berlau
View All