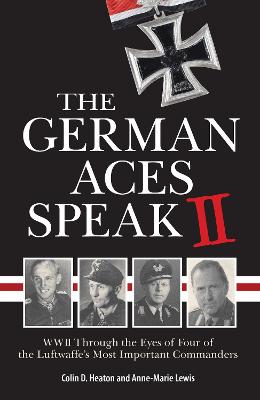 World War II Through the Eyes of Four More of the Luftwaffe's Most Important Commanders New Edition, paperback reissue

The much-anticipated sequel to The German Aces Speak gives voice to four more of WWII's most noteworthy German pilots.

When The German Aces Speak published in 2011, Air & Space/Smithsonian magazine welcomed Colin Heaton's and Anne-Marie Lewis' masterful command of interview-based narrative, writing, ". . . what might have been numbing recitations of dogfights are instead vivid descriptions of life as a warrior during World War II." Indeed, it is this unexpected perspective, brought to life by the authors' neutrality and thoughtful research, that illuminates a side of war largely hidden from the American public: the experience of the German Luftwaffe pilot.

In The German Aces Speak II, Heaton and Lewis paint a picture of the war through the eyes of four more of Germany's most significant pilots: Johannes Steinhoff, Erich Alfred Hartmann, Gunther Rall, and Dieter Hrabak-- put together from numerous interviews personally conducted by Heaton from the 1980s through the 2000s. The four ex-Luftwaffe fighter aces bring the past to life as they tell their stories about the war, their battles, their off-duty lives, their lives after the war, and, perhaps most importantly, how they felt about serving under the Nazi leadership of Hermann Goering and Adolf Hitler. Together, the memories of the events captured in The German Aces Speak II continue one of today's most unique World War II book series, unearthing a facet of the war that has gone widely overlooked for the American public.

» Have you read this book? We'd like to know what you think about it - write a review about German Aces Speak II book by Colin Heaton and you'll earn 50c in Boomerang Bucks loyalty dollars (you must be a Boomerang Books Account Holder - it's free to sign up and there are great benefits!)

Professor Colin D. Heaton served in the U.S. Army and later the U.S. Marines. He was a guest historian on the History Channel program Dogfights: Secret Weapons, and he has authored several books of military history, including German Anti-Partisan Warfare in Europe 1939--1945 and Night Fighters: The Luftwaffe and RAF Air Combat over Europe, 1939--1945, which he coauthored with Anne-Marie Lewis. He has taught history and military history at American Military University. Anne-Marie Lewis received her BA with honors and MA from American Military University in international relations and is also a professional photographer. She lives in Southport, North Carolina.

A Preview for this title is currently not available.
More Books By Colin Heaton
View All

German Anti-Partisan Warfare in Europe
No Stock on Hand, Supplier Has No Due Date for Supply.
$61.19 $67.99