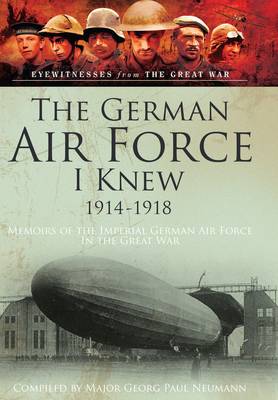 Major Georg Paul Neumann was a former German Air Force officer who had served in the Great War. He produced his outstanding survey of the German Air Force in 1920 while the events were still recent history. He was able to draw on his own experience and his contacts to compile a large number of personal accounts from officers and men who had so recently fought in the cause. The result is an accurate, faithful and comprehensive review of the aircraft, personnel and organisation of the force which began life in 1910 as the Imperial German Army Air Service and ended the war as the Luftstreitkrafte. This comprehensive and compelling review includes a series of primary sources dealing with some of the unusual and lesser known aspects of the Luftstreitkrafte including a gripping account of defending a Zeppelin against attack by British fighters. Major Neumann's indispensable work has never been surpassed and this English language translation is essential reading for anyone with an interest in the realities of the war in the air in the Great War.

» Have you read this book? We'd like to know what you think about it - write a review about German Airforce I Knew 1914-1918 book by Georg Paul Neumann and you'll earn 50c in Boomerang Bucks loyalty dollars (you must be a Boomerang Books Account Holder - it's free to sign up and there are great benefits!)


A Preview for this title is currently not available.
More Books By Georg Paul Neumann
View All