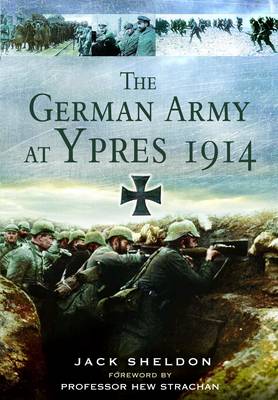 Description - The German Army at Ypres 1914 by Jack Sheldon

This book will be the first complete account of the operations of the German army in the battles north of Lille in the late autumn of 1914. The main emphasis will be placed on the battles around Ypres against the Old Contemptibles of the BEF, but the fighting against the French and Belgian armies will also be featured, thus providing fresh, broader, insights into a campaign. There are those who consider that the BEF was all that saved world civilization as the first year of the Great War drew to its end. The book uses the comprehensive histories of the participating German regiments found in the Kriegsarchiv in Munich and the Hauptstaatsarchiv in Stuttgart. Their use adds authority and authenticity to the book. The narrative adopts a chronological approach. The book focuses on some of the most bitterly disputed battles of the first three months of the war, when the Germans strained to achieve a breakthrough and the BEF resisted heroically, at the price of its own destruction. The book employs a similar format to the author's previous works; that is to say the greater part of the text uses the words of the German participants themselves and the primary focus of the book covers the experiences of the fighting troops at regimental level and below. Linking paragraphs provide historical context and commentary and evidence from senior commanders will be introduced as necessary. AUTHOR: Jack Sheldon is now firmly established as the leading authority on the German Army in the First World War. A retired soldier he lives in France and is fully engaged researching and writing. His German Army on the Somme was a run-away success and he has built on his reputation with The German Army at Passchendael, the German Army at Cambrai and The German Army on Vimy Ridge, all with Pen & Sword Books. SELLING POINTS: -The latest in the acclaimed 'German Army' series by Jack Sheldon -The author's approach of describing momentous battles and campaigns from the standpoint of the German Army has proved highly popular -Covers the bitter fighting around Ypres as the two opposing sides attempted to bring the War to an early conclusion ILLUSTRATIONS 16 pages of b/w plates

Book Reviews - The German Army at Ypres 1914 by Jack Sheldon

» Have you read this book? We'd like to know what you think about it - write a review about German Army at Ypres 1914 book by Jack Sheldon and you'll earn 50c in Boomerang Bucks loyalty dollars (you must be a Boomerang Books Account Holder - it's free to sign up and there are great benefits!)