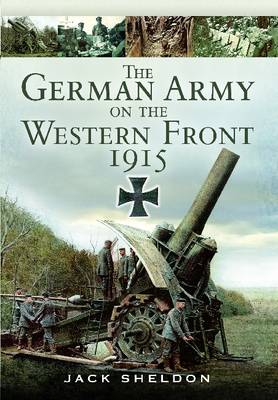 The German Army on the Western Front 1915

Jack Sheldon examines the German mindset at the close of 1914 when it became apparent that a quick victory was no longer a possibility. Both sides were temporarily exhausted in static positions from the Channel to the Swiss Border. In a reversal of roles, the French launched major offensives in Champagne and Artois, while the British Army, adapting to the demands of large scale continental warfare, went on the offensive in support at Neuve Chapelle, Aubers Ridge and Loos. Such was the Allied pressure that the only German offensive in 1915 was at Ypres in April using gas on a large scale for the first time. 1915 was a transitional year on the Western Front with lessons being learned the hard way by both sides prior to the massive attritional battles of 1916 and 1917. Using his skill at archival research, Sheldon describes how the 1915 experience shaped the German approach to the cataclysmic battles that lay ahead, leading to the ultimate, previously unthinkable defeat of the Kaiser's Germany. SELLING POINTS: ILLUSTRATIONS:

» Have you read this book? We'd like to know what you think about it - write a review about German Army on the Western Front 1915 book by Jack Sheldon and you'll earn 50c in Boomerang Bucks loyalty dollars (you must be a Boomerang Books Account Holder - it's free to sign up and there are great benefits!)