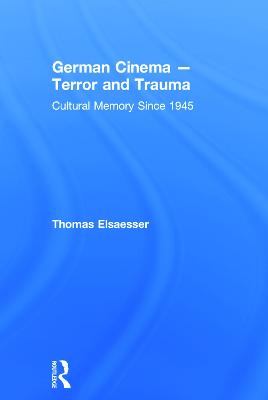 In German Cinema - Terror and Trauma Since 1945, Thomas Elsaesser reevaluates the meaning of the Holocaust for postwar German films and culture, while offering a reconsideration of trauma theory today. Elsaesser argues that Germany's attempts at "mastering the past" can be seen as both a failure and an achievement, making it appropriate to speak of an ongoing 'guilt management' that includes not only Germany, but Europe as a whole. In a series of case studies, which consider the work of Konrad Wolf, Alexander Kluge, Rainer Werner Fassbinder, Herbert Achterbusch and Harun Farocki, as well as films made in the new century, Elsaesser tracks the different ways the Holocaust is present in German cinema from the 1950s onwards, even when it is absent, or referenced in oblique and hyperbolic ways. Its most emphatically "absent presence" might turn out to be the compulsive afterlife of the Red Army Faction, whose acts of terror in the 1970s were a response to-as well as a reminder of-Nazism's hold on the national imaginary. Since the end of the Cold War and 9/11, the terms of the debate around terror and trauma have shifted also in Germany, where generational memory now distributes the roles of historical agency and accountability differently. Against the background of universalized victimhood, a cinema of commemoration has, if anything, confirmed the violence that the past continues to exert on the present, in the form of missed encounters, retroactive incidents, unintended slippages and uncanny parallels, which Elsaesser-reviving the full meaning of Freud's Fehlleistung-calls the parapractic performativity of cultural memory.

Other Editions - German Cinema - Terror and Trauma by Thomas Elsaesser » Have you read this book? We'd like to know what you think about it - write a review about German Cinema - Terror and Trauma book by Thomas Elsaesser and you'll earn 50c in Boomerang Bucks loyalty dollars (you must be a Boomerang Books Account Holder - it's free to sign up and there are great benefits!)

Thomas Elsaesser is Professor Emeritus of Film and Television Studies at the University of Amsterdam and since 2006 Visiting Professor at Yale University. His recent books include: Weimar Cinema and After (Routledge 2000); Metropolis (BFI 2000); Studying Contemporary American Film (Hodder 2002, with Warren Buckland); European Cinema: Face to Face with Hollywood (Amsterdam University Press 2005); Film Theory: An Introduction Through the Senses (Routledge 2010, with Malte Hagener); and The Persistence of Hollywood (Routledge 2012).

A Preview for this title is currently not available.
More Books By Thomas Elsaesser
View All