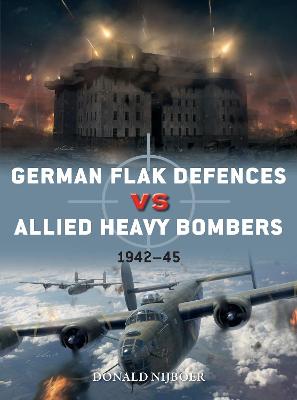 Since the end of World War II, the strategic bombing of Germany has inspired numerous studies, countless books and several documentary films, and it is not surprising. With more than one million tons of bombs dropped, close to 300,000 civilians killed, 700,000 wounded and in excess of 3,500,000 industrial and residential structures destroyed, the Allied bomber offensive was industrial war on a grand scale. The air battle that raged over Germany has often been described as a battle between Allied and German fighters but what has been frequently missed by historians on all sides is the impact of German anti-aircraft defences (flak). Though often dismissed as ineffective and a waste of valuable material and personnel, the German flak arm made a major contribution to the defence of the Third Reich - at least half of the American aircraft shot down over Germany fell to flak, and according to the RAF Official History, it was estimated that flak accounted for 1229 of 3302 aircraft lost by Bomber Command between 1942 and April 1945. Additionally, the strategic role of flak extended beyond simply shooting down aircraft - its other, more important task was to force bombers to drop their ordnance sooner or from a higher altitude, thus reducing bombing accuracy.
Both these roles are explored in depth in this detailed study of the German flak defences and of their adversaries, the Allied heavy bombers. Containing full-colour illustrations including cockpit scenes and armament views, this is the definitive guide to the much-overlooked conflict between Allied planes and German anti-aircraft defences.

» Have you read this book? We'd like to know what you think about it - write a review about German Flak Defences vs Allied Heavy Bombers: 1942-45 book by Donald Nijboer and you'll earn 50c in Boomerang Bucks loyalty dollars (you must be a Boomerang Books Account Holder - it's free to sign up and there are great benefits!)


A Preview for this title is currently not available.
More Books By Donald Nijboer
View All