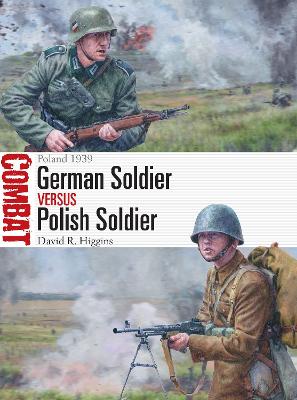 The Nazi invasion of Poland in September 1939 saw mostly untested German troops face equally inexperienced Polish forces. With the Polish senior leadership endeavouring to hold the country's industrialized east, Hitler's forces unleashed what was essentially a large pincer operation intended to encircle and eliminate much of Poland's military strength. Harnessing this initial operational advantage, the Germans were able to attack Polish logistics, communications and command centres, thereby gaining and maintaining battlefield momentum. With the average infantry soldier on both sides comparatively well-led, equipped and transported, vital differences in battlefield support (especially air power and artillery), tactics, organization and technology would make all the difference in combat.

Featuring specially commissioned artwork, archive photography and battle maps, this study focuses upon three actions that reveal the evolving nature of the 1939 campaign. The battle of Tuchola Forest (1-5 September) pitted fast -moving German forces against uncoordinated Polish resistance, while the battle of Wizna (7-10 September) saw outnumbered Polish forces impede the German push north-east of Warsaw. Finally, the battle of Bzura (9-19 September) demonstrated the Polish forces' ability to surprise the Germans operationally during a spirited counter-attack against the invaders. All three battles featured in this book cast light on the motivation, training, tactics and combat performance of the fighting men of both sides in the 1939 struggle for Poland.

» Have you read this book? We'd like to know what you think about it - write a review about German Soldier vs Polish Soldier: Poland 1939 book by David R. Higgins and you'll earn 50c in Boomerang Bucks loyalty dollars (you must be a Boomerang Books Account Holder - it's free to sign up and there are great benefits!)


A Preview for this title is currently not available.
More Books By David R. Higgins
View All