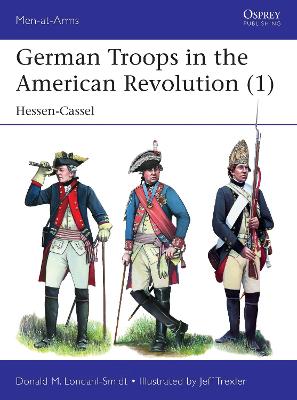 During the American Revolution (1775-83), German auxiliary troops provided a vital element of the British war effort. Some 30,000 German troops served in North America, continuing a long-established relationship between Britain and various German principalities. These troops were widely referred to as mercenaries, implying that they sold their services individually, but they were in fact regular troops hired as a body by the British. Initially feared by the American population, the German troops came to be highly respected by their opponents. Their role in the fighting would inform the tactics and methods of a generation of German officers who returned to Europe after the war, many of whom went on to hold senior commands during the French Revolutionary and Napoleonic wars.

The largest body of German troops was from Hessen- Cassel. The only German contingent to be employed as a unit under its own general officers, they were clothed and equipped in the style of Frederick the Great's Prussians and were trained in much the same way. Many had seen active service during the Seven Years' War (1756-63) and served under career officers; they were well-disciplined and competent but showed little overt enthusiasm for the British cause. The troops of Hessen-Cassel would participate in every major campaign of the conflict, with the specialized skills of the famous Jager being particularly in demand. Fully illustrated, this lively study examines the organization, appearance, weapons, and equipment of the Hessen-Cassel troops who fought for King George in the American Revolution.

» Have you read this book? We'd like to know what you think about it - write a review about German Troops in the American Revolution (1): Hessen-Cassel book by Donald M. Londahl-Smidt and you'll earn 50c in Boomerang Bucks loyalty dollars (you must be a Boomerang Books Account Holder - it's free to sign up and there are great benefits!)