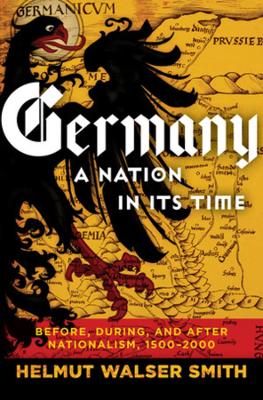 Description - Germany: A Nation in Its Time: Before, During, and After Nationalism, 1500-2000 by Helmut Walser Smith

An epic in the tradition of Jonathan Spence's The Search for Modern China and Jill Lepore's These Truths, Helmut Walser Smith's sterling work promises to redefine our perception of German history. For nearly a century, conventional historians have depicted Germany as a rabidly nationalist land, born in a sea of aggression, its nineteenth-century ascent accompanied by militarism and brought to a murderous apex in the Third Reich. Not so, asserts Smith, who, beginning in 1500, reveals early and even surprisingly pacific conceptions of the nation, and allows us to see the Nazis' extreme form of nationalism not as the dark culmination point of German history, but rather as an essential episode in Germany's centuries-long history of continually conceiving the nation in radically different ways. Whether chronicling the Thirty Years War, the German Enlightenment of Goethe and Schiller, the Weimar Republic, the Holocaust, or the era of Angela Merkel, Smith has created a new standard for the twenty-first-century.

Buy Germany: A Nation in Its Time: Before, During, and After Nationalism, 1500-2000 by Helmut Walser Smith from Australia's Online Independent Bookstore, Boomerang Books.

Book Reviews - Germany: A Nation in Its Time: Before, During, and After Nationalism, 1500-2000 by Helmut Walser Smith

» Have you read this book? We'd like to know what you think about it - write a review about Germany: A Nation in Its Time: Before, During, and After Nationalism, 1500-2000 book by Helmut Walser Smith and you'll earn 50c in Boomerang Bucks loyalty dollars (you must be a Boomerang Books Account Holder - it's free to sign up and there are great benefits!)


A Preview for this title is currently not available.
More Books By Helmut Walser Smith
View All