A slightly spooky but mostly funny series about the mischief ghosts can make - and the kids who take care of the mess.

A slightly spooky but mostly funny series about the mischief ghosts can make - and the kids who take care of the mess.

Angeline and Edgar might be kids, but they're also two of Ghost Club's youngest ghost-catchers. Got a problem with a ghost, poltergeist or ghoul? Can't sleep because of all the rattling chains and cackling laughter? Angeline and Edgar are the experts to call.

So it's entirely logical that when new kid Dylan joins Ghost Club, Angeline and Edgar are the perfect candidates to introduce him to everything he needs to know, from which ghost-catching gadget will do the trick to when to run like crazy to avoid being splattered with ectoplasm.

The trouble is, Dylan's not quite sure he wants to be a ghost-catcher . . . 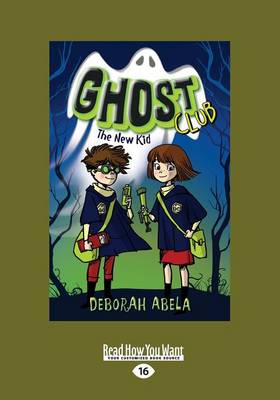 » Have you read this book? We'd like to know what you think about it - write a review about Ghost Club 1 book by Deborah Abela and you'll earn 50c in Boomerang Bucks loyalty dollars (you must be a Boomerang Books Account Holder - it's free to sign up and there are great benefits!)

Having always been short and a bit of a coward, Deborah dreamed of being braver and stronger, which is probably why she writes books about spies, ghosts, soccer legends and characters good with swords who take on sea monsters and evil harbour lords. She is the author of the Max Remy Superspy series, Jasper Zammit (Soccer Legend) series, The Remarkable Secret of Aurelie Bonhoffen and Grimsdon, about a flooded city, a group of lost children, sneaker waves and flying machines. She's won awards for her books but mostly hopes, one day, to be as brave as the characters inside.