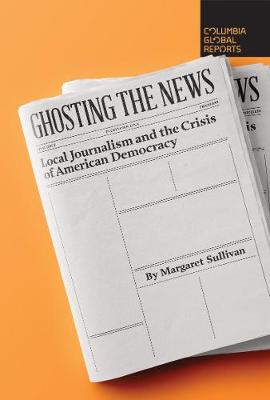 Ghosting the News: Local Journalism and the Crisis of American Democracy

Description - Ghosting the News: Local Journalism and the Crisis of American Democracy by Margaret Sullivan

Local journalism is on the verge of extinction and this is bad for democracy. This book explains why.

Ghosting the News tells the most troubling media story of our time: How democracy suffers when local news dies. Reporting on news-impoverished areas in the U.S. and around the world, America's premier media critic, Margaret Sullivan, charts the contours of the damage but also surveys some new efforts to keep local news alive -- from non-profit digital sites to an effort modelled on the Peace Corps. No nostalgic paean to the roar of rumbling presses, Ghosting the News instead sounds a loud alarm, alerting citizens to the growing crisis in local news that has already done serious damage. She explains how a lack of local news in communities results in more polarisation, less political engagement, and more poorly informed citizens who are less capable of making good decisions about governance. And she does it all through the lens of a journalist who spent most of her career in local news, including nearly thirteen years as the top editor of a regional newspaper, The Buffalo News. If local newspapers are on the brink of extinction, we ought to know the full extent of the losses now, before it's too late.

Book Reviews - Ghosting the News: Local Journalism and the Crisis of American Democracy by Margaret Sullivan

» Have you read this book? We'd like to know what you think about it - write a review about Ghosting the News: Local Journalism and the Crisis of American Democracy book by Margaret Sullivan and you'll earn 50c in Boomerang Bucks loyalty dollars (you must be a Boomerang Books Account Holder - it's free to sign up and there are great benefits!)


A Preview for this title is currently not available.
More Books By Margaret Sullivan
View All

Statistical Evaluation of Medical Tests for Classification and Prediction
$321.26 $356.95