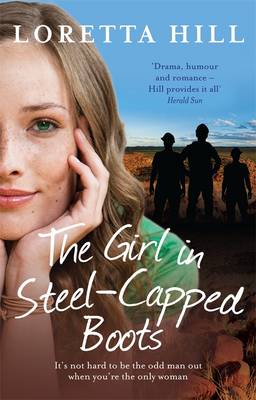 The Girl in Steel-Capped Boots

Description - The Girl in Steel-Capped Boots by Loretta Hill

Loretta Hill's bestselling debut is a delectable story of red dust and romance, and of dreams discovered in the unlikeliest of places...

Lena Todd is a city girl who thrives on cocktails and cappuccinos. So when her boss announces he's sending her to the outback to join a construction team, her world is turned upside down.

Lena's new accommodation will be an aluminium box called a dongar.

Unfortunately, Lena can't refuse. Mistakes of the past are choking her confidence. She needs to do something to right those wrongs and prove herself. Going into a remote community might just be the place to do that, if only tall, dark and obnoxious Dan didn't seem so determined to stand in her way ...

Book Reviews - The Girl in Steel-Capped Boots by Loretta Hill

» Have you read this book? We'd like to know what you think about it - write a review about Girl in Steel-Capped Boots book by Loretta Hill and you'll earn 50c in Boomerang Bucks loyalty dollars (you must be a Boomerang Books Account Holder - it's free to sign up and there are great benefits!)

Loretta always wanted to be a writer. As a kid she filled pages of exercise books with stories to amuse her friends. Her father, who never wasted his time on fiction, didn't see much worth in this pass time and pushed her to pursue a "sensible" career. Fortunately, she had inherited some of his talent for numbers and decided to give it a go. She graduated from the University of Western Australia as structural engineer and took her first job with a major West Australian engineering company. A few years later she met a lawyer at a Black Friday party hosted by a friend. She was dressed as the devil and he just came as himself. They are now happily married and living in Perth with their two young sons and infant daughter. Despite her career in engineering, her interest in law and her journey into motherhood, Loretta continued to write. Not because she had a lot of time but because it was and always had been an addiction she couldn't ignore. Her first novel (under the name Loretta Brabant) was a short romantic comedy called Kiss and Tell and was released in the USA in late 2009. The Girl in Steel-Capped Boots is her commercial women's fiction debut. Loretta drew upon