True Tales of Friendship Between Straight Women and Gay Men

This collection of original essays goes beyond the banter to get to the essence of an intimate relationship like no other. With a foreword byTales of the Cityauthor Armistead Maupin,Girls Who Like Boys Who Like Boysbrings together pieces by National Book Award winner Andrew Solomon (The Noonday Demon), novelist Gigi Levangie Grazer (The Starter Wife), Barneys New York creative director Simon Doonan (Nasty), and many others from all walks of life. In addition to stories of gays and gals bonding over brunch, these essays chronicle love and lust, infatuation and heartbreak, growing up and coming out, and family and children. With genuine warmth, this definitive anthology proves that more durable than diamonds, straight women and gay men are each other's true best friends. 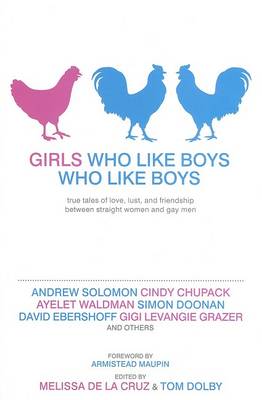 » Have you read this book? We'd like to know what you think about it - write a review about Girls Who Like Boys Who Like Boys book by Melissa De La Cruz and you'll earn 50c in Boomerang Bucks loyalty dollars (you must be a Boomerang Books Account Holder - it's free to sign up and there are great benefits!)

Melissa de la Cruz is the New York Times, USA Today, Wall Street Journal, Los Angeles Times and Publishers Weekly internationally bestselling author of many critically acclaimed novels. Her Blue Bloods series has sold over three million copies, and the Witches of East End series became an hour-long television drama on the Lifetime network. Tom Dolby is a filmmaker and novelist. His screenwriting and directorial debut, Last Weekend, premiered at the San Francisco International Film Festival and was released by IFC/Sundance Selects. Tom is the author of four novels, including the bestseller The Trouble Boy, and the critically acclaimed boarding school tale The Sixth Form. He lives in Los Angeles with his two daughters and too many dogs. Armistead Maupin was served as a naval officer in the Mediterranean and with the River Patrol Force in Vietnam. In 1976, he launched his groundbreaking Tales of the City serial in the San Francisco Chronicle. Maupin is the author of nine novels, including the six-volume Tales of the City series, Maybe the Moon, The Night Listener and Michael Tolliver Lives. The Night Listener became a feature film starring Robin Williams and Toni Collette. Maupin lives in San Francisco with his husband, Christopher Turner.

A Preview for this title is currently not available.
More Books By Melissa De La Cruz
View All

Pride and Prejudice and Mistletoe: a feel-good rom-com to fall in love with this Christmas
$16.79 $19.99