Give the Devil His Due

Description - Give the Devil His Due by Sulari Gentill

When Rowland Sinclair is invited to take his yellow Mercedes onto the Maroubra Speedway, renamed the Killer Track for the lives it has claimed, he agrees without caution or reserve. But then people start to die... The body of a journalist covering the race is found in a House of Horrors, an English blueblood with Blackshirt affiliations is killed on the race track... and it seems that someone has Rowland in their sights.

Buy Give the Devil His Due by Sulari Gentill from Australia's Online Independent Bookstore, Boomerang Books.

Other Editions - Give the Devil His Due by Sulari Gentill 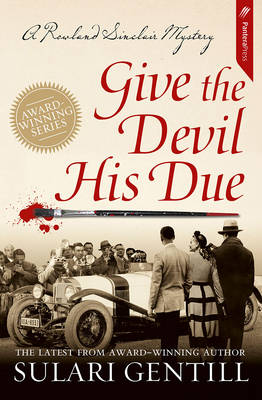 Book Reviews - Give the Devil His Due by Sulari Gentill

» Have you read this book? We'd like to know what you think about it - write a review about Give the Devil His Due book by Sulari Gentill and you'll earn 50c in Boomerang Bucks loyalty dollars (you must be a Boomerang Books Account Holder - it's free to sign up and there are great benefits!)

Book Review: Give the Devil His Due by Sulari Gentill - Reviewed by CloggieA (01 Feb 2020)

5 stars Give The Devil His Due is the seventh book in the Rowland Sinclair series by award-winning Australian author, Sulari Gentill. Despite its unpopularity with returned diggers, gentleman artist Rowland Sinclair has been convinced to enter his beloved yellow 1927 Mercedes S Class into a charity event at the notorious Maroubra Speedway. His team leader has plenty of experience; his other team member, an actor named Errol Flynn, is less experienced; but with practice, they stand a fair chance, even on what has been dubbed the killer track.

It seems the bookmakers would prefer if Rowly and his team, current favourites, did not win, and they seem to want to convince Rowly to throw the race. Then Smith’s Weekly journalist, Crispin White, having just interviewed Rowland about his German car, is brutally murdered in a Kings Cross waxworks: has this cursed track taken its next victim?

Worse still, Rowly’s poetic friend, Milton Isaacs comes under suspicion for the murder, and the investigating police detective seems unwilling to make any further enquiries. Meanwhile, Rowly’s artist friend, Clyde Watson-Jones is heartbroken when his girlfriend agrees to a marriage arranged by her family. Rowly is disturbed by New Guard leader, Eric Campbell’s run for parliament and is still trying to make people understand what is happening in Germany, the horrors he saw.

He hopes an exhibition of paintings inspired by the memories that plague him will have an effect, but wonders if he should wait until these other matters are resolved. But Edna tells him: “The world doesn’t stop so we can deal with one thing at a time. Life’s more an all-in brawl than one of your very proper boxing matches… A single identifiable opponent is an unrealistic luxury. As is an umpire to make sure everything’s sporting, that you all shake hands, adjust your ties, and have a cup of tea afterwards.”

In this instalment, Gentill again serves up plenty of fascinating historical detail, giving a few famous (and infamous) figures and products cameos (and some, more significant roles). There are twists and red herrings aplenty, leading to several exciting climaxes. Rowly twice has gainful employment recommended to him, encounters occultists, makes a drunken proposal, is beaten up, spends a night in the rough, and is shot at.

There are kittens, premonitory stories, three abductions for good or evil intent, a missing tiepin, and a missing notebook. Fans of the series will delight in a larger role for Rowly’s (quite spirited) mother, Elisabeth, now residing at Woodlands and relishing the company of his artistic friends.

Press clippings of the time that preface the chapters cleverly serve the purpose of providing information related to the text that follows, as well as depicting social attitudes of the era. As always, Gentill effortlessly evokes the era. Once again, a brilliant dose of Australian historical crime fiction. Readers by now hooked will appreciate knowing they can look forward to a further three (at least) instalments of this award-winning series, beginning with A Dangerous Language. This unbiased review is from an uncorrected proof copy provided by NetGalley and Poisoned Pen Press.